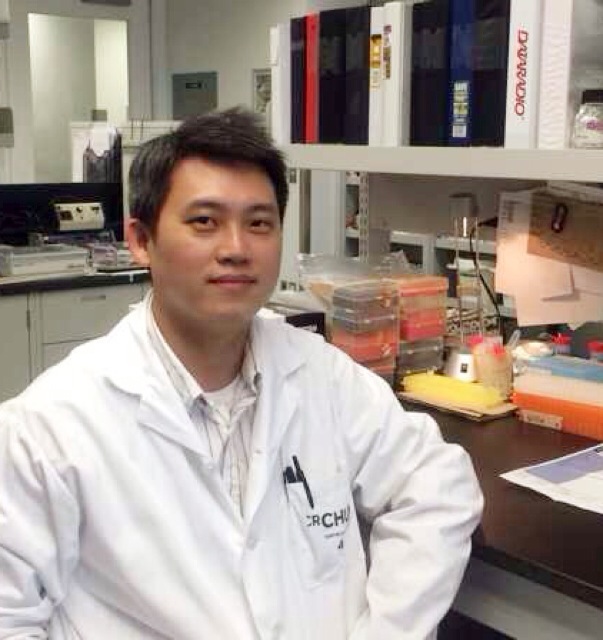 I received my Ph.D. degree from Kaoshung Medical University, Taiwan. I joined Dr. John SD Chan’s lab as a postdoctoral in the University of Montreal, Canada. Currently, I am a research associate in CHUM research center. My interesting is focus on the kidney how to modulate the blood pressure, particularly in some disease model like diabetes. Also, hypertension is now recognized as a key contributory factor in the development and progression of kidney disease in diabetes. Recent clinical trials also support the utility of blood pressure reduction in the prevention of diabetic kidney disease. The control of the blood pressure represents a key component for the prevention and management of diabetic kidney disease. Thus, exploring the underlying mechanism of intrarenal angiotensinogen may have a potential on target of modulating the blood pressure. Dr. Chan’s lab has identified a novel nuclear protein (Heterogeneous Nuclear Ribonucleoprotein F, hnRNPF) which binds on the rat angiotensinogen promoter. I started from renal proximal tubular hnRNPF transgenic mice and cross-breed with diabetic type 1 Akita mice (Diabetes 2012) and type 2 db/db mice (Diabetes 2017). These results show that hnRNP F plays a modulatory role and can ameliorate hypertension, renal hypertrophy and interstitial fibrosis in diabetes. The underlying mechanism is mediated, at least in part, via the suppression of intrarenal Agt gene expression in vivo. Moreover, by employing the Cre/lox system to generate tubular hnRNPF KO mice show elevated SBP and up-regulated angiotensinogen expression in non-diabetic mice. It is convincing that hnRNP F may be a potential target in the treatment of hypertension and kidney injury. In the future, I hope to be able to combine my expertise in experimental therapeutics and diabetic nephropathy, which is often linked to cardiovascular disease, as an independent investigator to explore and cure chronic kidney disease.

Our data demonstrate that hnRNP F plays an important role in the development of hypertension and kidney injury through modulation of renal Agt expression. Pax8-hnRNP F KO mice may provide a novel experimental model to study the development of glycosuria in non-diabetic mice.