Kidney transplant recipients (KTR) have a 4-fold higher risk of fracture compared to the general population. Chronic inflammation and protein energy wasting (PEW) syndrome are common in KTR and associated with poor outcomes. The presence of inflammation and PEW syndrome can directly affect bone resorption and bone formation, leading to bone loss and fractures. We assessed the association between Malnutrition-Inflammation Score (MIS) a marker of PEW and bone fractures in KTR.

This prospective cohort study included 839 prevalent KTR. MIS is a semiquantitative instrument for the evaluation of Malnutrition–Inflammation Complex Syndrome, was calculated at the study entry. Self-reported history of fractures was recorded during the 2-year follow-up period. The association between MIS and bone fractures was examined in logistic regression analyses with adjustment for age, gender, eGFR, smoking habits, history of pre-transplant bone fractures and acute rejection.

Mean age was 51±13 years and 56% of patients were males. Fifty-five (7%) patients experienced bone fractures during the follow-up period. In logistic regressions, MIS score showed linear association with increased risk of fracture (Figure 1). Each 1-point higher MIS was associated with 23% higher risk of bone fractures (odds ratio (OR) and 95%CI: 1.23, 1.12–1.34), which remained significant after multivariable adjustments (OR: 1.17, 95%CI: 1.06–1.29).

The MIS is independently associated with new bone fractures in prevalent KTR. 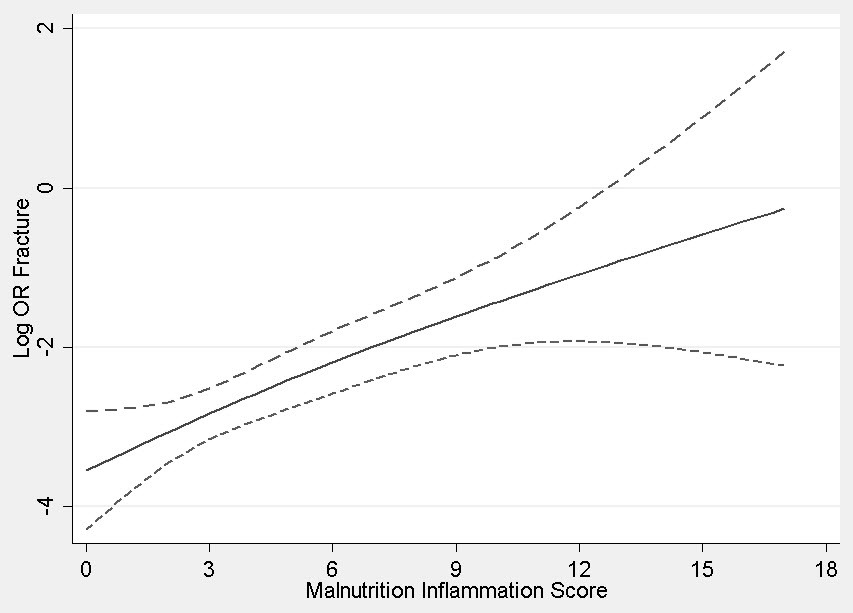