Metabolic Differences in Diabetic Kidney Disease Patients with and Without Albuminuria

Metabolic Differences in Diabetic Kidney Disease Patients with and Without Albuminuria

The classical paradigm describing diabetic kidney disease (DKD) as a linear progression with stages of glomerular hyperfiltration, progressive albuminuria, and subsequent declining GFR is being recently challenged. 25-50% of DKD with eGFR <60ml/min/1.73m2 do not have albuminuria, and the underlying pathology in this group is not well studied. We studied the metabolic differences in unselected well-matched DKD patients with (DKD A1+) and without (DKD A0) albuminuria.

15 of 41 DKD patients (37%) had ACR <3.0mg/mmol. Age and sex were similar in the healthy control, DKD A0 and DKD A1+ groups (∼ 71 years, p=0.3; and 40% males, p=0.6). Baseline eGFR was identical in DKD A0 and A1+ (51 vs 51 ml/min/1.73m2). They also had similar BMI, BP, BP medication, physical activity and education (p>0.4 for all), while DKD A0 had more never-smokers (p=0.002). PLS-DA analysis of the organic acid metabolites showed that the three groups separated moderately, with DKD A0 positioned between controls and DKD A1+ patients (Figure 1). When comparing the two DKD groups, we found 22 metabolites with VIP scores ≥1.0, i.e. considered to contribute significantly to separation. Top metabolites were hexanol glycine, lactic acid and keto-glucatic acid. Enrichment analysis based on these metabolites showed that citric acid cycle, Warburg effect, glucose-alanine, keton body metabolism, and fatty acid biosynthesis were the most affected pathways (p<0.05 and ∼ 5-fold enriched for all). 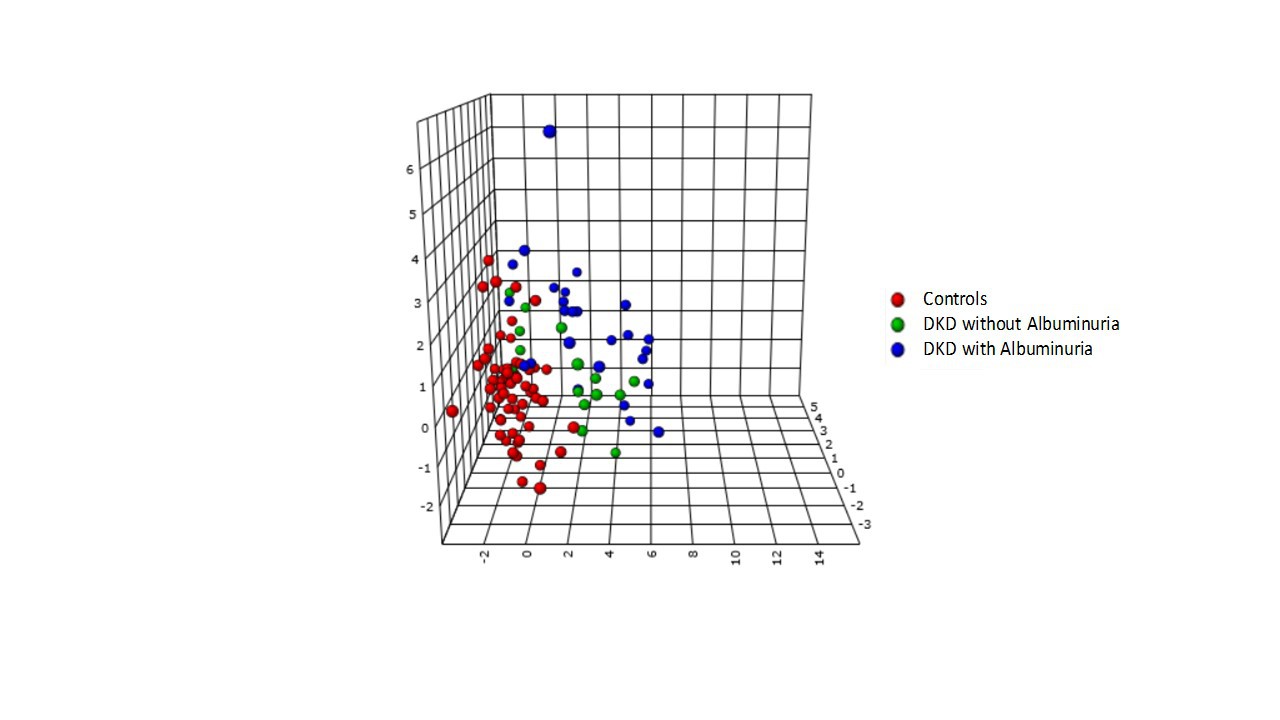