De-identified data were extracted from electronic records for adult HD pts in 4 countries (France, Italy, Spain, Portugal) who were newly prescribed SFOH as part of routine care between Jan 2016 and Oct 2017. Baseline (BL) was defined as the 3-month period prior to SFOH prescription. Mean PB pill burden and sP levels were analyzed for Months 1–3 (Q1) and Months 4–6 (Q2) of SFOH treatment using mean values from the BL period as the reference. Effectiveness of SFOH for control of sP levels was evaluated for pts who had not received PB therapy during BL (PB-naïve) and those who had (PB-experienced).

1347 pts were included (mean age: 61.6 years; 63.5% male), of whom 605 pts were PB-experienced and 742 were PB-naïve. Characteristics of pts in these subgroups were generally comparable; median dialysis vintage was longer in PB-experienced vs. -naïve pts (50 vs. 34 months). The % of pts with sP control (≤5.5 mg/dL) during BL was lower in the PB-experienced (31.6%) vs. the PB-naïve (44.9%) subgroup (Figure). In both subgroups, the % pts achieving sP ≤5.5 mg/dL increased significantly from BL through Q1 and Q2. For PB-experienced pts, these sP improvements were achieved with a reduction in PB pill burden. 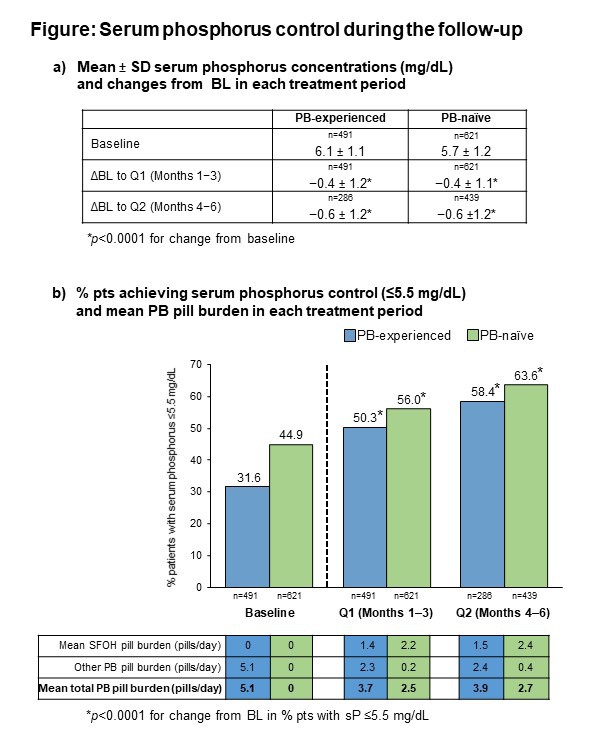