The Impact of Pre-ESRD Testosterone Level upon Post-ESRD Mortality Among US Male Veterans: A Transition of Care in CKD Study

The Impact of Pre-ESRD Testosterone Level upon Post-ESRD Mortality Among US Male Veterans: A Transition of Care in CKD Study

Testosterone deficiency is a common endocrine complication in the elderly male population, with a disproportionately high prevalence observed in those with chronic kidney disease (CKD). While lower circulating levels of testosterone have been linked with higher risk of cardiovascular disease and death in the general population, little is known about the impact of testosterone deficiency upon the health and survival of non-dialysis dependent (NDD) CKD patients transitioning to end-stage renal disease (ESRD).

Among a national cohort of male US veterans with NDD-CKD transitioning to ESRD over 2007-15, we examined the association of total testosterone levels averaged over the two-year pre-ESRD prelude period with post-ESRD mortality risk using Cox models adjusted for sociodemographics, cause of ESRD, Charlson comorbidity score, and comorbidities.

Among 1219 veterans who underwent one or more total testosterone measurements in the two-year prelude period, those in the lowest testosterone tertile had higher mortality risk in expanded case-mix models (ref: highest tertile): adjusted HR (aHR) (95%CI) 1.31 (1.07-1.62) (Figure). A similar relationship between the lowest total testosterone tertile and higher death risk was observed when measurements were examined over six-month and one-year prelude periods: aHRs (95%CI): 1.70 (1.16-2.49) and 1.46 (1.11-1.93), respectively. 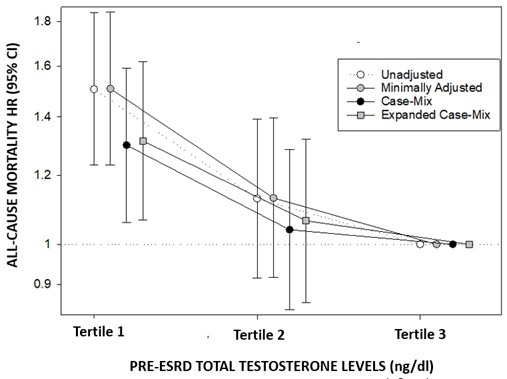