P2X7 is an ionotropic receptor activated by extracellular ATP and expressed on immune cells including macrophages and dendritic cells. P2X7 may have an important role in kidney disease. However, the specific role of P2X7 in different cell types is controversial. We characterise a novel P2X7 knockout (KO) rat and define the role of P2X7 in IL-1β production in bone marrow derived macrophages (BMDM) and dendritic cells (BMDC).

A P2X7 KO rat was created using zinc finger nucleases. Cells and tissues were used for extraction of protein and mRNA for Western blot and PCR. P2X7 function was assessed using uptake of Yo-pro1 dye in response to ATP and by stimulating cells with LPS 1μg/ml followed by ATP 5mM, and measuring IL-1β production. When P2X7 antagonist or caspase-1 inhibitor was used this was added 30 mins prior to LPS.

No P2X7 protein was detected in P2X7 KO rat cells or tissue. BMDM and BMDC from WKY WT but not P2X7 KO rats formed pores and took up Yo-pro1 following ATP stimulation. As expected, WKY WT BMDM produced significant IL-1β when stimulated with LPS plus ATP compared to LPS alone. In contrast, BMDM from P2X7 KO rats did not produce IL-1β (Figure 1A). However, both WKY WT and P2X7 KO BMDC were able to cleave IL-1β following stimulation with LPS alone, Use of a P2X7 antagonist (A438079) confirmed this was P2X7 independent (Figure 1B). IL-1β release was independent of K+ efflux from cells, but was inhibited by a caspase-1 inhibitor.

This is the first description of a novel P2X7 KO rat showing it is a true knockout. BMDC (but not BMDM) do not require a second signal via P2X7/ATP to produce active IL-1β. IL-1β is a powerful pro-inflammatory cytokine and is thought to play a role in human and experimental glomerulonephritis; understanding how different cell types use different pathways to produce IL-1β will improve our understanding of the pathogenesis of kidney diseases. 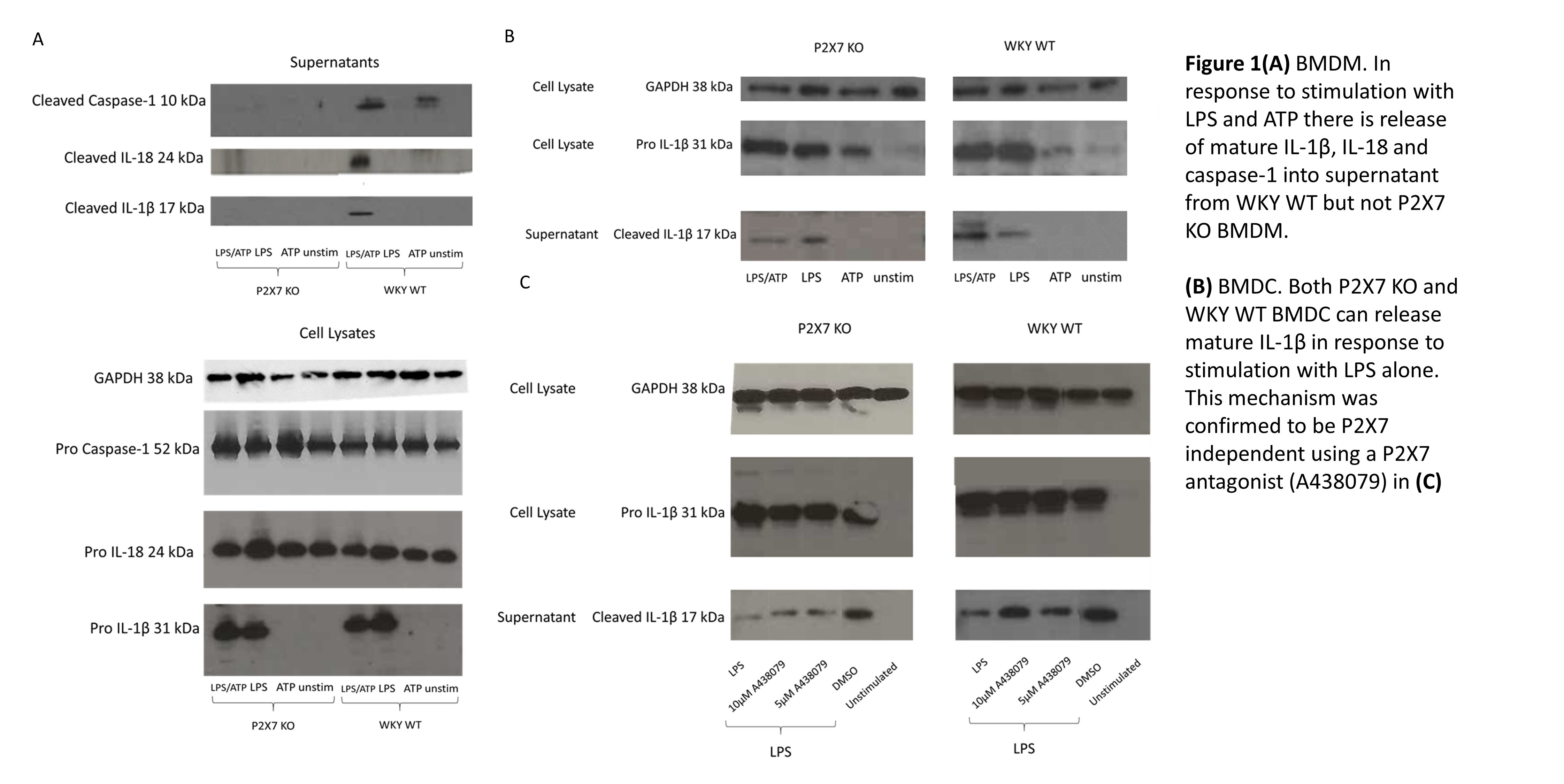