Impaired renal function is a recognized comorbidity of gout and gouty tophi may be more frequent in those with renal dysfunction. It is not known however, whether the velocity of resolution of tophi in response to urate lowering therapy is affected by renal insufficiency.

This analysis used results from two 6-month randomized controlled trials of pegloticase in patients with chronic refractory gout to address this issue. The velocity of tophus resolution was determined in 18 patients with chronic gout refractory to oral urate lowering therapy who responded to pegloticase administered at a dose of 8 mg every 2 weeks (q2w) with sustained serum urate reductions (<6 mg/dL) over 6 months. eGFR was determined at baseline and after 3 and 6 months of treatment. Tophi were photographed at baseline, 3, 4.5, and 6 months and measured using Computer-Assisted Photographic Evaluation technology. At baseline, the mean area of photographed tophi was 585.8 mm2.

The results from this analysis thus indicate that renal impairment does not compromise the ability of pegloticase to resolve tophi rapidly in patients who respond with sustained reductions in serum urate. 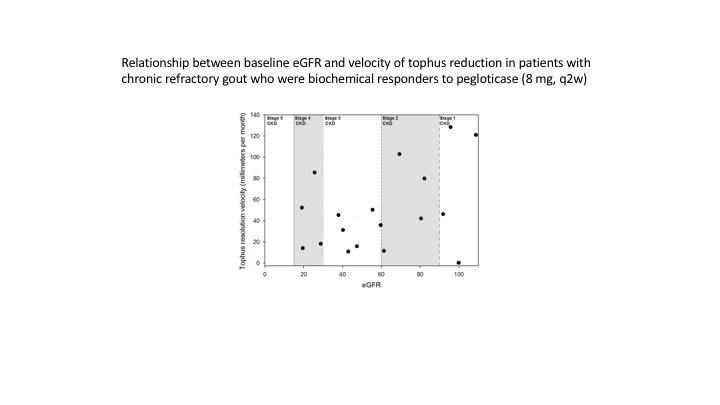