Membranous nephropathy (MN) is associated with a high risk of thromboembolism. We describe a patient who presented with multiple thromboemboli with delayed diagnosis of secondary MN due to diffuse lymphadenopathy suspicious for malignancy.

A 26-year-old African American female presented with dyspnea, pleuritic chest pain, and edema. CTA revealed multiple segmental PEs and a left renal vein thrombosis. Imaging also found diffuse mediastinal and axillary lymphadenopathy with a prominent hilar mass compressing the right lower lobe pulmonary artery, all of which were FDG avid on PET. Radiology findings was suspicious for lymphoma, however an axillary node biopsy was negative for cancer. Infectious workup was negative. Laboratories were significant for creatinine of 0.6mg/dl, albumin <1 gm/dl, and 7.3 grams proteinuria. Serologies were positive for ANA, anti-Smith, anti-dsDNA, and anti-U1RNP. Kidney biopsy showed widespread IgG-dominant subepithelial deposits consistent with MN. A secondary cause of MN was suggested by mesangial widening with deposits, tubuloreticular inclusions, and lack of PLA2R staining. Based on serologies, arthritis, and renal involvement, the patient was diagnosed with systemic lupus erythematosus (SLE). She was started on high dose prednisone, mycophenolate and anticoagulation. Resolution of proteinuria and edema was seen after six months. Followup physical exam and chest X-ray showed no lymphadenopathy.

Diffuse lymphadenopathy, though less common nowadays, may be a prominent presenting feature of SLE and was highlighted in our case. Initial delays in kidney biopsy occurred due to malignancy evaluation and this atypical SLE presentation. Our case was ultimately diagnosed to be SLE with hypercoagulability due to nephrotic syndrome from MN. 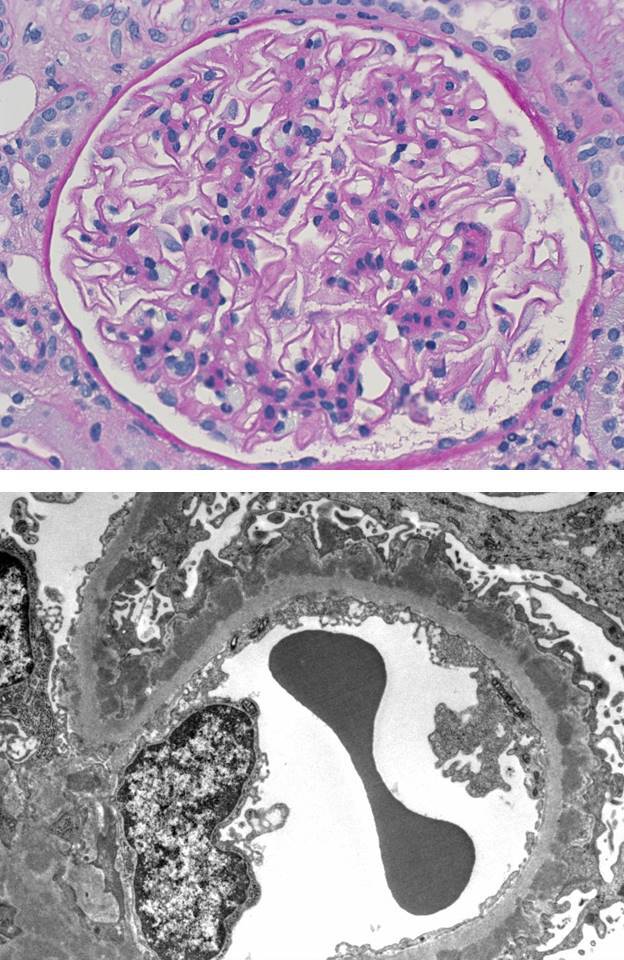