Rituximab, an anti CD20 monoclonal antibody, is one of the alternative medications offered to children and adults with Nephrotic syndrome. Despite the growing knowledge regarding this medication, there are still concerns regarding long-term safety that need to be considered prior to initiation of therapy. Given these risks there is a need to identify characteristics of patients who will respond best to rituximab therapy.

We identified all patients who received rituximab within NEPTUNE, a prospective study of adults and children with glomerular disease enrolled at the time of first biopsy or at initial presentation.Remission was defined as UPCR<0.3 mg/mg after rituximab initiation. Kaplan-Meier plots and log-rank tests were used to compare the probability of response among various levels of demographic and clinical variables.

Rituximab response rate in patients with MCD/NSNS were higher and quicker than in those with MN. Young children with MCD/MSNS had the highest rates of response.Future work is now targeted at identifying additional biomarkers (specifically lymphocyte profile) to predict response to rituximab. 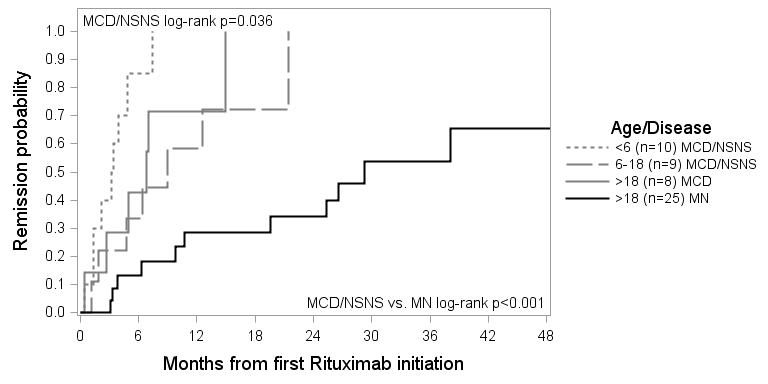