Gabapentin is widely used in the management of neuropathic pain but has multiple well-known side effects but less recognized is edema. We describe a case of gabapentin induced edema, which was misdiagnosed as CHF exacerbation, resulting in significant diuretic use and stage 3 AKI.

An 85-year-old male with a past medical history of stage 4 chronic kidney disease secondary to diabetic nephropathy (baseline serum creatinine 2-2.5mg/dl), Type 2 Diabetes Mellitus, diabetic neuropathy, and hypertension, presented to clinic for worsening of serum creatinine.
Pertinent home medications included bumetanide 3 mg BID, metolazone 2.5 mg daily and gabapentin 600 mg TID. Bumetanide and metolazone were up titrated for worsening bilateral lower extremity edema over last 3 months with 20-pound weight gain. Exam was notable for 2+ LE edema.
His serum creatinine progressively increased from 2.4 to 4 mg/dl in the setting of aggressive diuresis. A recent TTE showed only grade 1 diastolic dysfunction. The presumed diagnosis was heart failure with preserved ejection fraction.
Urine sediment was bland. After identification of gabapentin as potential culprit agent for his edema, both gabapentin as well as his diuretics were discontinued with a resultant significant drop in his weight and serum creatinine to 218lbs and 2.7mg/dl respectively over next one month and complete resolution of his edema.

Incidence of gabapentin induced edema varies from 2% to 8% and has been correlated to dosage. Exact mechanism is unknown but possibly related to loss of venoarteriolar reflex leading to increased capillary hydrostatic pressure and hence increased net capillary fluid filtration into the interstitium. Gabapentin induced edema, just like calcium channel blockers induced edema, is not associated with salt and water retention and hence diuretics are ineffective.

Physicians, especially nephrologists, should be mindful of uncommon side effect of this commonly prescribed medication as distinguishing this early can prevent a lot of unnecessary work up and potentially prevent harm to the patient. 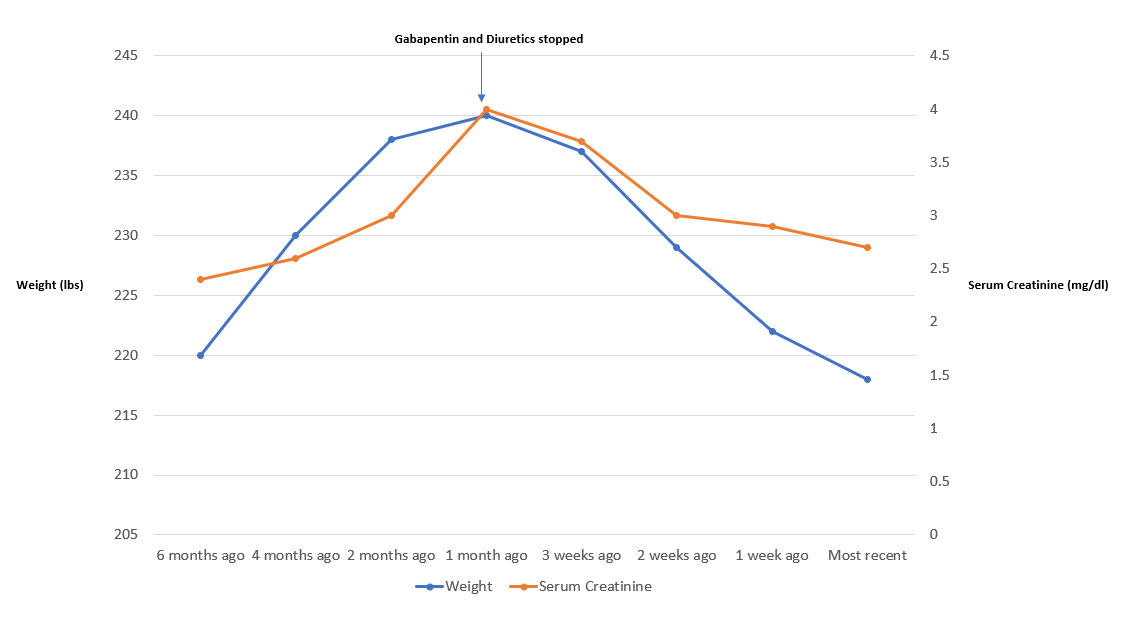