Prevalence of Renal Dysfunction in Youth with Epidermolysis Bullosa

Prevalence of Renal Dysfunction in Youth with Epidermolysis Bullosa

Little is known regarding the prevalence of renal disease in youth with epidermolysis bullosa (EB), which we describe here.

We conducted a retrospective review of electronic health records of 170 (48.8% female, 51.2% male) EB patients aged < 25 years followed by our institution within years 1986-2019. We report the age-based prevalence of hematuria (≥ 1+ on urinalysis [UA] or ≥ 5 red blood cells per high power field) and proteinuria (≥ 30 mg/dL). We also describe the outcomes of those with persistently abnormal UAs, defined as hematuria and proteinuria or nephrotic-range proteinuria on ≥ 2 consecutive tests. Finally, we compare mortality in EB youth with versus without acute kidney injury (AKI), defined per Kidney Disease Improving Global Outcomes.

The overall prevalence of microscopic hematuria was 22.7%, with no significant difference between sex (p = 0.10). Age-based microscopic hematuria followed a bimodal distribution, with increased prevalence among younger (0-3 years) and older (>12 years) children (p=0.003) [Fig. 1]. The overall prevalence of proteinuria was 16.9%, with no significant differences between sex (p = 0.35) or age (p = 0.73) [Fig. 1]. 10 patients (5.9%) had persistently abnormal UAs and were diagnosed with: C3 glomerulopathy (4), urethral stricture (2), infection (2), IgA nephropathy (1), and acute tubular necrosis (1). AKI occurred in 19 patients (11.2%) and was significantly associated with mortality (47.4% in the AKI cohort versus 20.0% in the non-AKI cohort, p = 0.01). Identified causes of death in AKI patients were multiorgan failure including renal failure (3), renal failure alone (1), respiratory failure (1) and severe malnutrition (1).

Many youth with EB have hematuria and/or proteinuria, suggesting glomerulonephritis and/or urologic abnormalities may be underdiagnosed in this population. AKI is significantly associated with mortality in EB youth, with renal failure as a potential common cause of death. 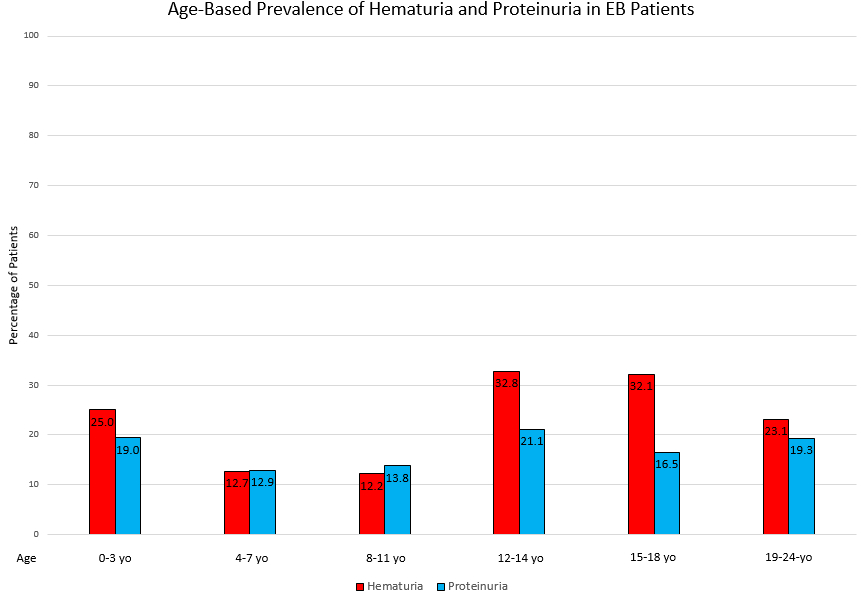