Incidence of Intradialytic Hypotension Throughout a Hemodialysis Session: Does the Time of Onset Matter?

Incidence of Intradialytic Hypotension Throughout a Hemodialysis Session: Does the Time of Onset Matter?

Intradialytic hypotension (IDH) is a common complication of hemodialysis (HD). Probability of IDH would be expected to increase during HD as removed ultrafiltration (UF) volumes increase. We aimed to describe the incidence of IDH throughout HD and associations of the time of IDH with clinical parameters and with survival.

We studied routinely collected data from 21 US dialysis clinics. IDH was defined as: 1) systolic blood pressure (SBP) < 90 mmHg; and 2) SBP< 90 mmHg and a reduction in SBP > 30 mmHg. Only the first IDH incident per session was included. Time of IDH was defined in 30-minute intervals. Patients who experienced IDH were classed as early- or late-onset based on whether most sessions with IDH had incidents in the first 2 hours or not. Association of early-onset IDH with clinical parameters and mortality were explored with logistic regression and Cox proportional hazard models.

We studied 4,348 patients and 785,682 sessions. For definitions 1 and 2, IDH occurred in 13% and 7% of treatments with a range of 2.6-3.3 and 0.9-2.7 episodes per 100 session-intervals at risk, respectively. IDH occurred in the first 2 hours in 45% and 33% of IDH sessions, respectively. IDH incidence was not associated with time into HD using definition 1; a positive association was observed using definition 2. Adjusted hazard ratios for death comparing early-onset IDH with late-onset were 1.5 and 1.7 for definitions 1 and 2. Early-onset IDH was associated with female sex, higher age and UF rates and lower BMI and SBP.

Early-onset IDH is not uncommon. More consideration of the nature and time of IDH onset, in the context of how it is defined, could help to minimize IDH. 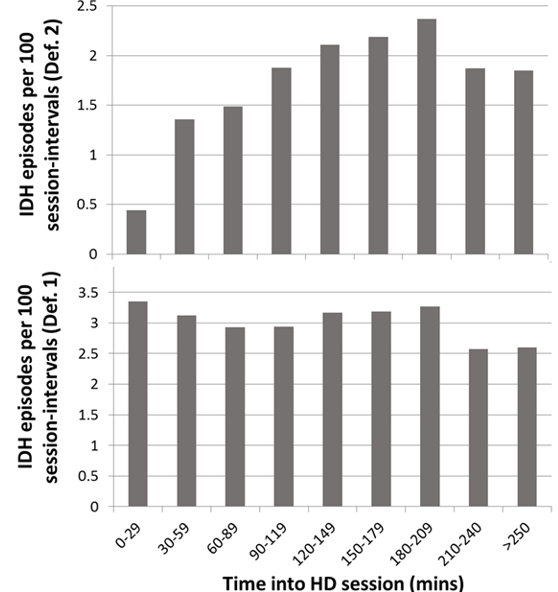