Fabry disease is an X-linked lysosomal storage disorder characterized primarily by kidney, cardiac and central nervous system dysfunction. Over a 1000 mutations have been identified to be associated with disease. We describe a patient with biopsy confirmed Fabry disease identified to have very rare mutation not listed in genetic databases.

A 48 year old female with past medical history of chronic kidney disease G4A3 (previously biopsy proven Fabry disease), dilated cardiomyopathy, atrial fibrillation, previously treated breast cancer, was referred to our clinic by a nephrology group given progressive worsening of kidney function and consideration for migalastat. Patient was diagnosed with Fabry disease at the age of 32 (normal renal function at the time), and subsequently received agalsidase beta for a period of 3 years thereafter. However, therapy was ceased due to insurance issues. In the interim, patient has progressive decline in renal function (creatinine 2.5 mg/dL on referral), worsening proteinuria, along with development of dilated cardiomyopathy and neuropathy. We proceeded with genetic testing to identify mutation of galactoside A (GLA) gene and kidney biopsy(image 1). Genetic testing revealed a novel mutation variant c.820G>C(p.Gly274Arg) deemed to be heterozygous and of unknown significance by the laboratory. Kidney biopsy revealed classic finding of glomerular inclusions (podocyte and mesangium) with diffuse renal parechymal scarring. Patient was eventually prescribed agalsidase beta, given non amenability to migalastat.

This case highlights identification of a very rare mutation of the GLA gene that appears to have late onset manifestations. Pursuing genetic testing in patients with Fabry disease has become more important with the introduction of novel therapy migalastat, which may not be compatible with numerous pathogenic mutations. 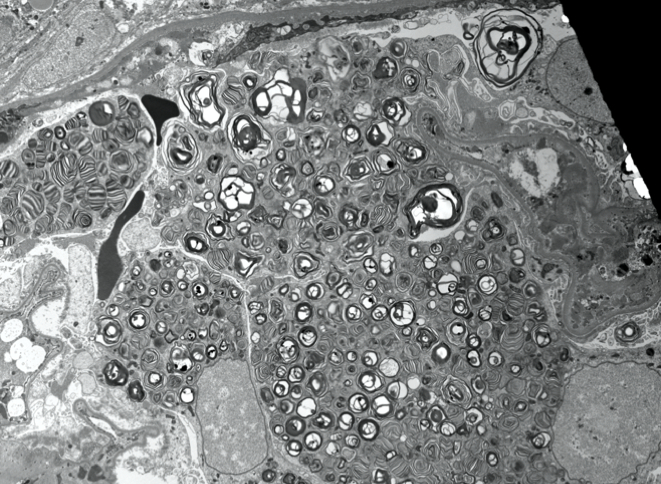