Transforming growth factor-β1 (TGF-β1) is a crucial factor implicated in the development of renal inflammation and tubulointerstitial fibrosis. The cytokine interleukin 22 (IL-22) was previously reported to involve in the pathogenesis of chronic inflammatory diseases In the present study, we aim to investigate the role and mechanisms of IL-22 in renal tubular cells inflammation and fibrosis induced by TGF-β1.

HK-2 cells were treated with TGF-β1 in the presence of IL-22 or the Notch pathway inhibitor dibenzazepine (DBZ) for 48 h. Cell proliferation was determined by MTT assay, Cytotoxicity was assessed by LDH assay. Collagen I (Col I), fibronectin (FN), α-smooth muscle actin (α-SMA), vimentin and E-Cadherin were detected by western blot, proinflammatory factors (TNF-α, IL-6) and chemokines (MCP-1, RANTES) in the supernatant of cell cultures were evaluated by ELISA. Jagged1, Notch1, NICD1, and Hes1 were also detected by western blot.

In our study, IL-22 (10–40 ng/ml) did not affect cell proliferation and cytotoxicity. Then IL-22 (20 ng/ml) incubation for 48 h was chosen for subsequent experiment. We found TGF-β1 increased the levels of Col I, FN, α-SMA and vimentin in HK-2 cells compared with control, and decreased E-Cadherin level, however, IL-22 restored their expressions partly. IL-22 reduced over expression of proinflammatory factors (TNF-α, IL-6) and chemokines (MCP-1, RANTES) levels induced by TGF-β1, along with down-regulation of Jagged1, Notch, NICD1 and Hes1. Fibrosis and inflammation in renal tubular cells induced by TGF-β1 could be attenuated by IL-22, and the effects were similar to DBZ treatment.

Collectively, our study shows that IL-22 exerts a protective role in renal fibrotic and inflammatory responses induced by TGF-β1 in vitro, which may be through inhibiting Jagged1/Notch1 signaling pathway activation. 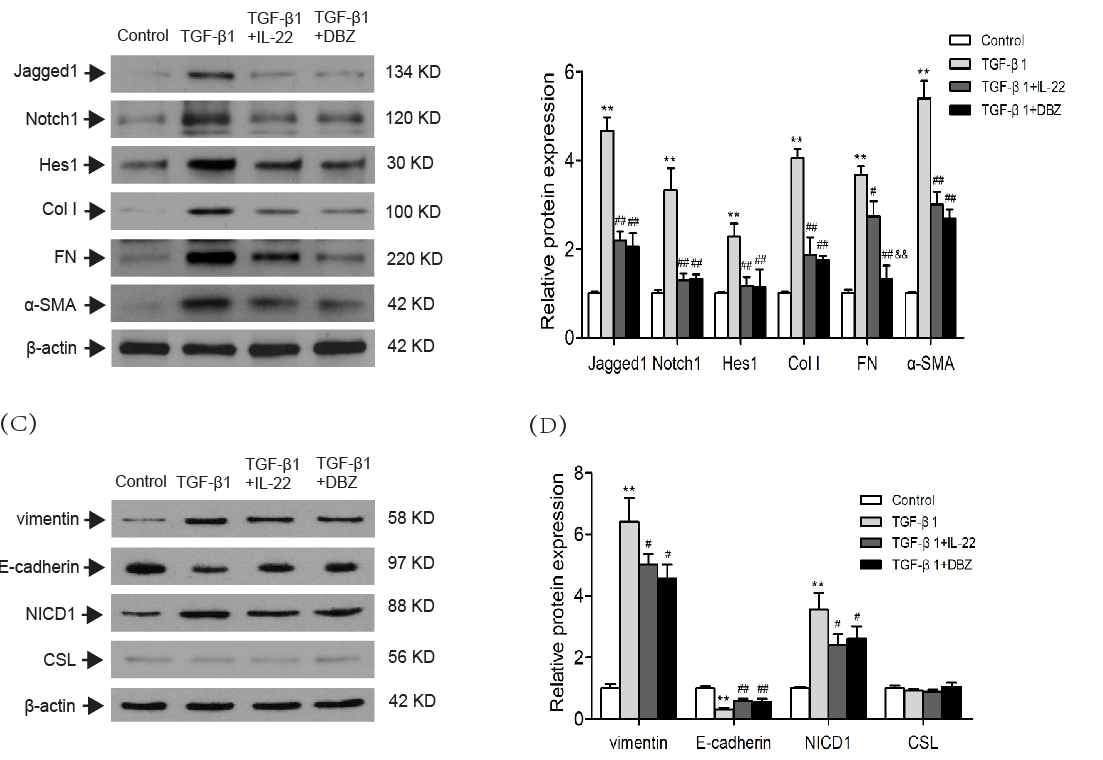