Pregnancy-triggered aHUS (P-aHUS) accounts for 10–20% of aHUS diagnoses. Complement-mediated thrombotic microangiopathy (CM-TMA) may be associated with high maternal and fetal morbidity and mortality such as ESRD. The clinical characteristics of P-aHUS and survival probability in patients treated with the complement C5 inhibitor eculizumab are described, using the largest collection of P-aHUS data available in a single study.

Patients with a clinical diagnosis of aHUS were included in the global aHUS registry (NCT01522183). Patients with P-aHUS were selected as those with first TMA manifestations during pregnancy or within 60 days postpartum. Patients with other triggers of aHUS were excluded. Survival, based on time to ESRD, was calculated by the Kaplan-Meier method.

In the registry, 51/1029 female patients were selected with P-aHUS and 27 received eculizumab. Mean ± SD age at pregnancy onset was 30.7 ± 5.9 years. P-aHUS occurred during pregnancy in 28 (54.9%) patients, with the remainder occurring postpartum. A diagnosis of pre-eclampsia or HELLP (hemolysis elevated liver enzymes low platelet count) syndrome was reported in 28 (54.9%) and 17 (33.3%) patients, respectively. A complement pathogenic variant was identified in 23 (45.1%) patients, of whom 3 (8.3%) also tested positive for anti-complement factor H antibodies. Mean ± SD eculizumab treatment duration was 1.8 ± 1.8 years. Survival probability was higher in eculizumab-treated patients compared with patients not receiving eculizumab (Figure).

Survival probability was higher in patients who received eculizumab compared with patients who did not receive eculizumab. Successful treatment with eculizumab, in addition to almost half of the patients having a complement pathogenic variant, confirms the appropriate classification of P-aHUS as a CM-TMA. 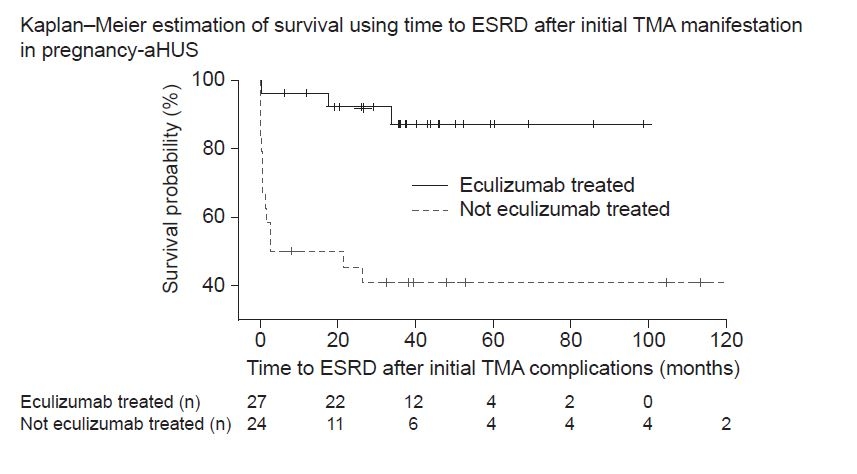