Early Ganciclovir-Resistant Cytomegalovirus Infection in a Kidney Transplant Recipient: Could We Avoid It?

Early Ganciclovir-Resistant Cytomegalovirus Infection in a Kidney Transplant Recipient: Could We Avoid It?

Although uncommon, ganciclovir-resistant cytomegalovirus (GR-CMV) can lead to a therapeutic challenge given drug nephrotoxicity. Here we report a case of GR-CMV infection during early post-kidney transplant (KT).

A 41-year-old woman with ESRD received the second KT in February 2019 with rATG induction. She also received rituximab one dose for pre-KT donor specific HLA antibodies. Maintenance immunosuppression are tacrolimus, mycophenolate sodium (MPS), and prednisone. Serum creatinine slowly trended down to the baseline of 1.3mg/dL at 3 month post-KT. CMV IgG serostatus was D+/R-. She received a 6-month CMV prophylaxis with a renally-adjusted dose of valganciclovir 450 mg twice weekly for 1 month, which was increased to 450 mg twice daily for 5 more months. 4 months after the CMV prophylaxis was completed, she developed asymptomatic CMV viremia with a titer up to peak of 47,643 IU/ml. Valganciclovir 900 mg twice daily was started and MPS was decreased. CMV PCR slowly decreased to 440 IU/ml after 1 month of therapy. Despite continuation of valganciclovir, CMV PCR became rapidly increased to 3,349 IU/ml [Figure]. A CMV genetic resistance test revealed a UL97, but not UL54 gene mutation. Foscarnet was started and CMV PCR was decreased. Allograft function has been at the baseline.

Our patient has several risk factors for GR-CMV including high-risk CMV serostatus, prolonged exposure to low-dose oral valganciclovir prophylaxis, and intensified immunosuppression including rituximab. Given current treatment for GR-CMV remains limited with drug toxicity, adequate dose of CMV prophylaxis is critical to avoid GR-CMV. Pattern of CMV PCR after initiation of therapy should also raise a suspicion for GR-CMV and genetic CMV resistance testing is of paramount in early diagnosis. Novel preventive and therapeutic options may mitigate the risk of GR-CMV and drug-induced renal allograft toxicity. 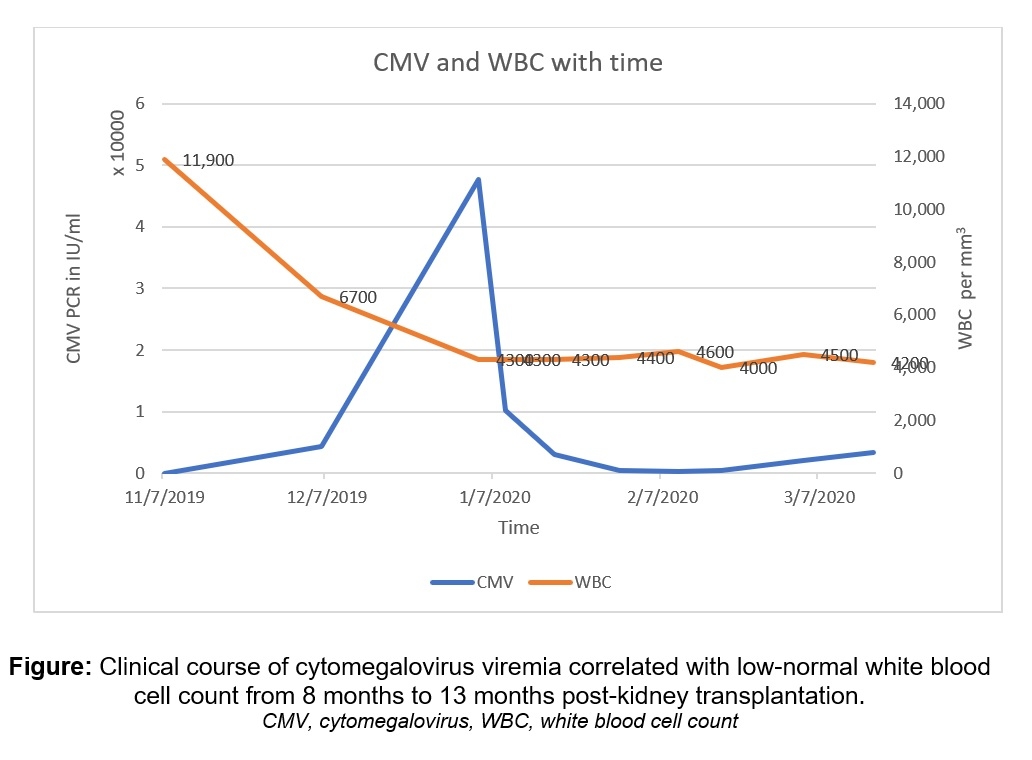