Glomerular lesions in lupus nephritis (LN) are classified according to the International Society of Nephrology and the Renal Pathology Society classification system and significant disagreement between pathologists can occur on histopathologic lesions. The aim of this study was to assess if deep learning on renal biopsy whole-slide images could be used to predict class III vs. IV status among patients enrolled in a randomized trial of obinutuzumab for the treatment of proliferative LN (NCT02550652).

Baseline biopsies from 84 of the 126 patients randomized were available for analysis. From each hematoxylin and eosin (H&E) slide, patches of 512x512 pixels were extracted resulting in an average of 500 patches per slide. An Inception v3 neural network (NN) with weights pretrained on the ImageNet dataset was used to make a prediction for each patch, which were then combined to make a prediction for the patient (Fig. A). From the initial weights, all slide’s layers were further fine-tuned using the cross-entropy loss between the model’s prediction and the patient’s true class. To evaluate the trained model, 25% of patients were held-out as a test set.

The NN was able to classify the held-out patients with an area under the receiver operating characteristic of 0.82 (95% CI 0.60 - 1.00). Patches associated with class III vs. IV prediction could be extracted from each patient to provide interpretation (Fig. B). 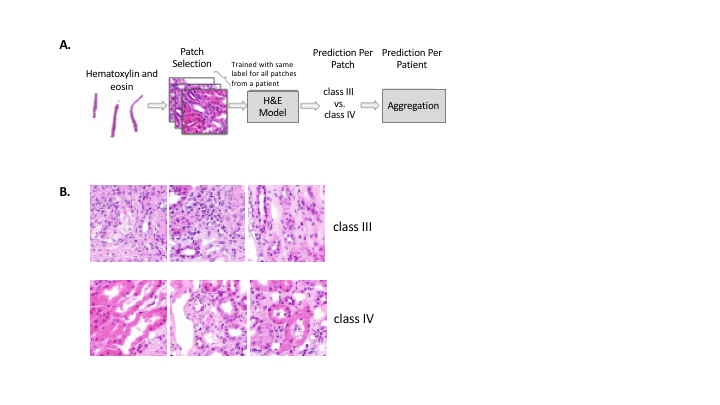