Thrombotic microangiopathy (TMA) has been associated with several cases of IgA nephropathy. In most cases the clinical significance of the TMA is uncertain. We describe a case of acute renal failure in a patient with systemic IgA vasculitis, who was found to have severe renal-limited TMA treated with eculizumab for the possibility of underlying complement dysregulation.

A 34 year old male presented with abdominal pain and bloody bowel movements, and was found to have extensive duodenitis. Infectious testing of stools was negative, though he later tested positive for H. pylori.

While hospitalized he developed acute kidney failure, with creatinine rising from 1.5 to 11.7 within four days. Urine sediment demonstrated granular casts consistent with acute tubular injury, though he also had white cell casts for which acute interstitial nephritis was considered. Blood counts were normal on admission, but he developed anemia and thrombocytopenia with mildly positive markers of hemolysis (haptoglobin 25, LDH 269, no schistocytes). Serum complements were profoundly low (C3 33, C4 9).

A kidney biopsy revealed severe TMA. Given the rapidity of progression to renal failure requiring dialysis, he was started on eculizumab for a presumed atypical hemolytic uremic syndrome (aHUS). Since he did not have evidence of active hemolysis, he was not started on plasmapharesis. Kidney biopsy demonstrated proliferation and expansion of the mesangium with IgA deposition. Endoscopy was later performed with biopsy consistent with systemic IgA vasculitis, for which he was started on steroids.

Abdominal symptoms improved and he was discharged home. He continues on eculizumab with normalization in complements, but without improvement in renal function.

There have been case reports of complement factor dysregulation resulting in both IgA vasculitis and TMA. Given the extent and acuity of renal failure in this case, we treated our patient with eculizumab for presumed aHUS. 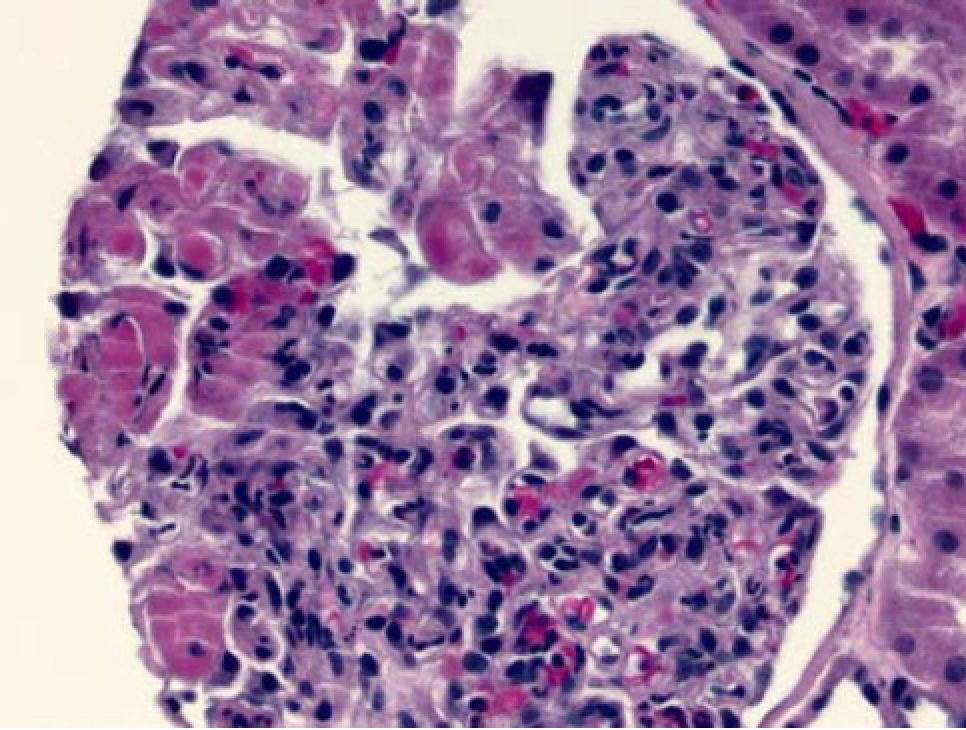