Vascular calcification (VC) increases the future risk of cardiovascular events in uremic patients, but effective therapies are still unavailable. Accurate identification of those at risk of developing VC using pathogenesis-based biomarkers is of particular interest and may facilitate individualized risk stratification. We aimed to uncover miRNA-target protein-based biomarker panels for evaluating uremic VC probability and severity.

We created a 3-tiered in vitro VC model and an in vivo uremic rat model receiving high phosphate diet to mimic uremic VC. RNAs from the in vitro and in vivo models underwent miRNA and mRNA microarray, with results screened for differentially expressed miRNAs and their target genes as biomarkers. Findings were validated in all models and human cells, followed by functional assays of identified miRNAs, and tests of sera from end-stage renal disease (ESRD) and non-dialysis dependent chronic kidney disease (CKD) patients without and with VC.

Totally 122 down-regulated and 119 up-regulated miRNAs during calcification progression were identified initially; further list-narrowing based on miRNA-mRNA pairing, anti-correlation, and functional enrichment left 16 and 14 differentially expressed miRNAs and mRNAs. Levels of 4 miRNAs (miR-10b-5p, miR-195, miR-125b-2-3p, and miR-378a-3p) were shown to decrease throughout all models tested, while 1 mRNA (SULF1, a potential target of miR-378a-3p) exhibited the opposite trend concurrently. Among 77 ESRD (88.3% with VC) (Figure A) and 59 CKD patients (61% with VC) (Figure B), serum miR-125b2-3p and miR-378a-3p decreased with greater VC severity, while serum SULF1 levels increased. Adding serum miR-125b-2-3p, miR-378a-3p, and SULF1 into regression models for VC substantially improved performance compared to using clinical variables alone.

Using a translational approach, we discovered a novel panel of biomarkers for gauging the probability/severity of uremic VC based on miRNAs and their target proteins, which improved the diagnostic accuracy. 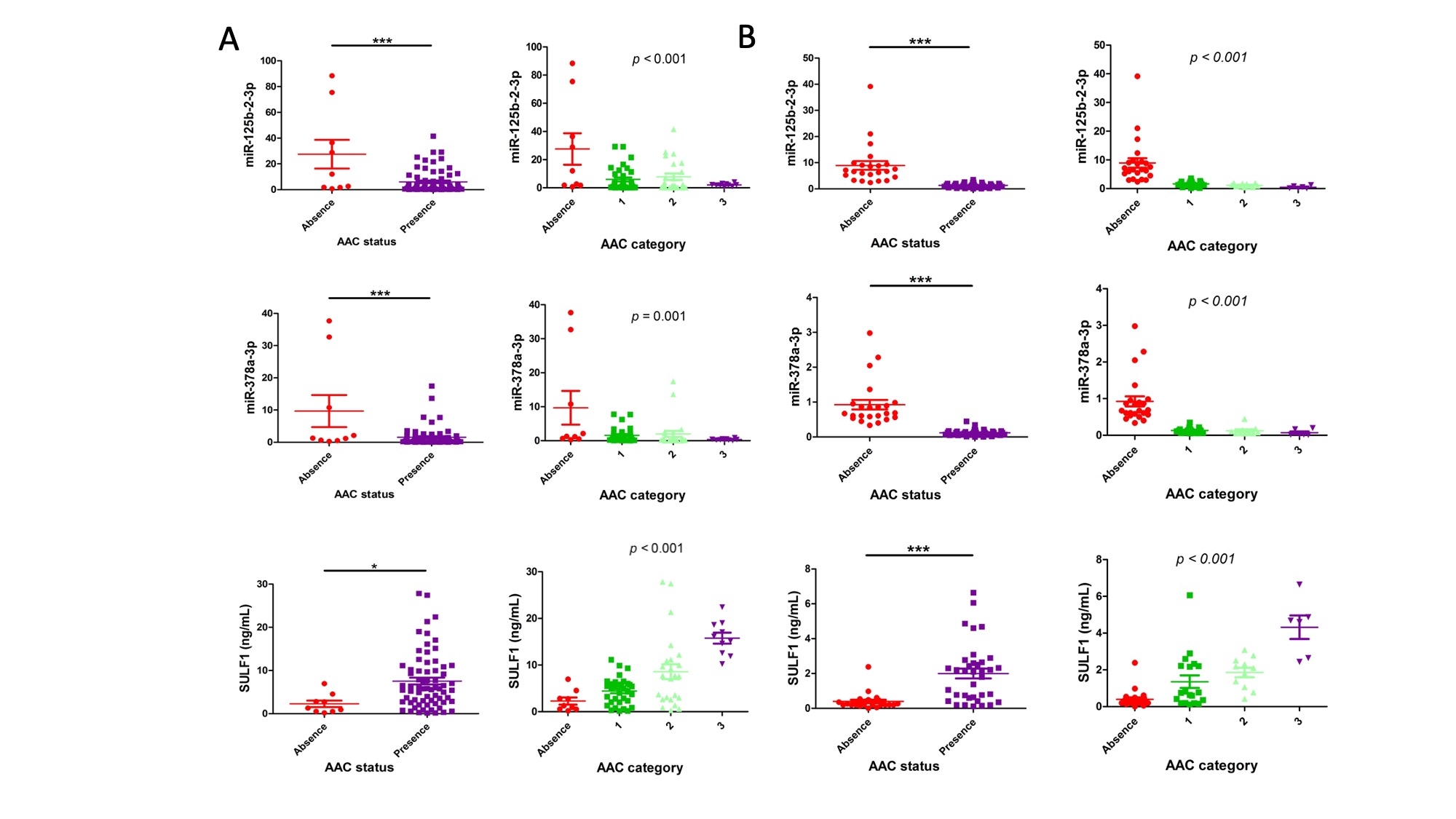