Extracorporeal Removal of Valproic Acid in Overdose: A Case Report

Extracorporeal Removal of Valproic Acid in Overdose: A Case Report

We report a case of a 53-year old 50kg woman admitted for suicidal polydrug intoxication. She had ingested 15g of VPA, 300mg of atorvastatin, 3g of quetiapine, and 750mg of naltrexone 3 hours prior to admission. Her vital signs were stable on admission and she was somnolent but arousable. Toxicology assays for ethanol, acetaminophen, and salicylates were negative. Biochemistry, blood gases, and complete blood count were unremarkable. She was initially treated with intravenous saline, naloxone, and intravenous carnitine. Despite these, she became progressively obtunded over 24 hours during which the serum VPA concentration rose from 69 to 422 mg/L (therapeutic concentration 50-125mg/L) and ammonia concentration rose from 17 to 56 mmol/L. Hemodialysis (HD) was initiated for 6h (GFS-210, Qb=400mL/min, Qd=750mL/min) via a right temporary femoral catheter because of concerns of coma-induced hyperammonemia and reduced access to VPA measurements. Her level of consciousness normalized during HD. No complications occurred during HD. VPA concentration and ammonia concentrations at the end of HD were 78 mg/L and 15 mmol/L, respectively, and did not re-increase thereafter (Figure 1). She was given three 50g doses of activated charcoal after HD and she eventually made a full recovery. VPA half-life was 3.0h during HD, 18.9h during multidose charcoal, and 44.9h without treatment. VPA was 48% unbound at the onset of HD. Instantaneous VPA clearance (calculated using simultaneous plasma and effluent VPA concentrations) decreased from 45 to 22mL/min during HD as protein binding increased.

HD removed 1.4gm of VPA which would have been higher had HD been performed sooner after admission. This case illustrates that the dialyzability of VPA depends on its protein binding which itself depends on its serum concentration. 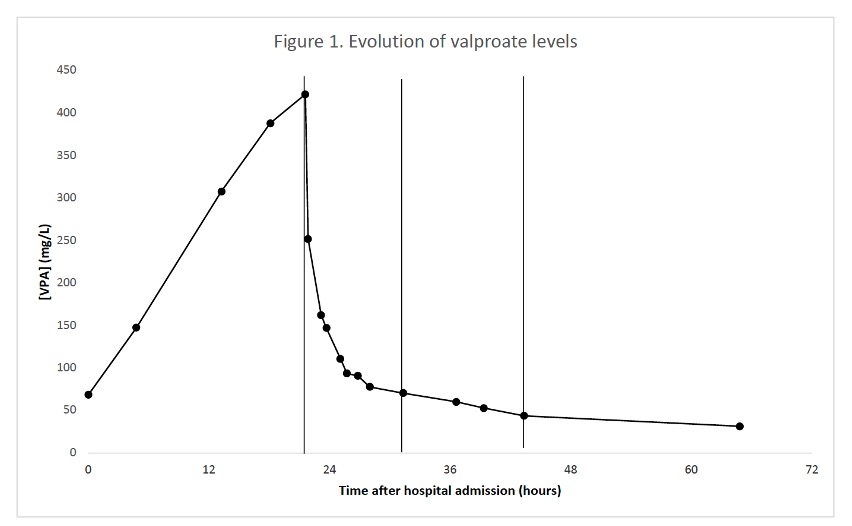