Pathogenic variants in PKD1 and PKD2 genes cause autosomal dominant polycystic kidney disease (ADPKD) that can also manifest in the liver, pancreas or cardiovascular system. Nonetheless, association of ADPKD with 3D facial gestalt has not been studied SO far. Here we present our first results of 3D facial morphometry in a Czech ADPKD patients.

Thirty ADPKD cases were enrolled and analyzed by the 3dMD Face System. Morphometric analyses were performed using the Morphome3cs software by comparing cases versus age and sex matched controls.

We observed that 3D facial gestalt in ADPKD patients differs from controls. ADPKD patients have more prominent nasal region, most significantly in the area of the tip of the nose. In addition, there is retrusion of the eyebrows area, midface-zygomatic prominence and retrusion of the lateral buccal region. Most of the ADPKD cases have thin upper lip (red part of lip) in opposition to a prominent lower lip.

The preliminary results of this pilot study suggest that there could be a distinct 3D facial gestalt in ADPKD. ADPKD is an ideal candidate for "phenotype-driven variant prioritization", where molecular genetic analysis could be linked to 3D morphometry. In ADPKD families, where molecular genetics failed to identify a causative variant, 3D morphometry could be used as a predictive marker of the risk of disease in presymptomatic patients. 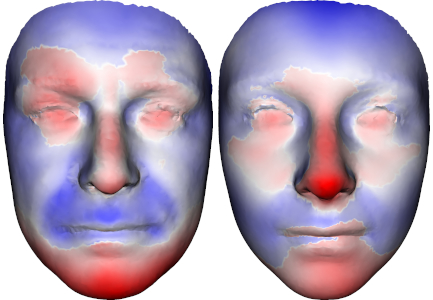