Glomerular diseases are caused by a variety of immunologic and metabolic disturbances. While there is considerable disease heterogeneity, morphologic patterns of injury are limited and clinical phenotypes are similar across diseases. This suggests that mechanisms of inflammation and the glomerular response to injury is similar across disease states. Characterizing these mechanisms may provide insights into the common pathways of glomerular injury and lead to new insights in pathogenesis and treatment. As a first step, we used an agnostic proteomics approach to identify common regulated pathways across a variety of glomerular disorders.

Kidney biopsies from 36 patients across several glomerular diseases and 21 controls (transplant donor biopsies) were used. Glomeruli were isolated using laser-capture microdissection, processed, and submitted for LC-MS/MS. Peptides were analyzed for spectral count quantitation. Spectral counts of each disease were compared to control samples that were analyzed in the same batch. Only peptides with a spectral count coefficient of variation <1 were included in expression ratio calculations. Disease-to-control expression ratios >2 or <0.5 were used for pathway analysis using Reactome. The top 10 pathways were grouped into domains and are depicted in figure 1.

Proteomic analysis of a heterogeneous population of glomerular diseases identified several shared dysregulated pathways that may reflect common final pathways associated with glomerular injury. These pathways reflect important immunologic and metabolic changes that have the potential to be leveraged therapeutically across a variety of glomerular diseases in a manner similar to RAAS blockade. 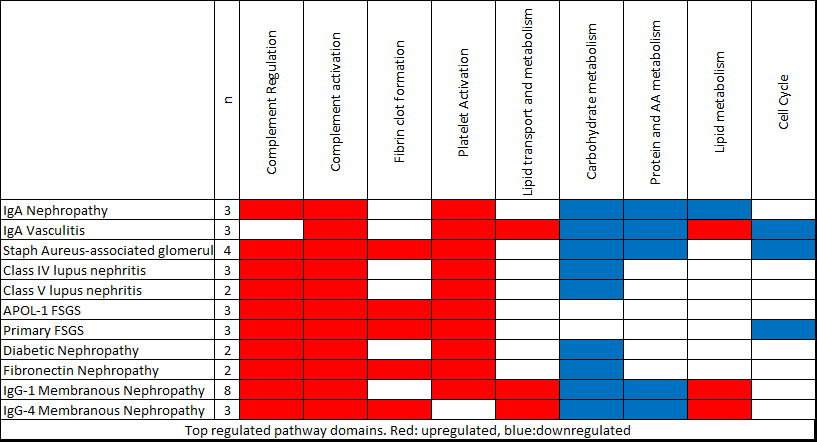