A 52-year-old woman with stage IV small cell lung cancer and prior gastric sleeve surgery on PPI therapy presented with diarrhea and AKI 5 months after discontinuing nivolumab. Her serum creatinine (SCr) was 5.5 mg/dL on presentation, from a baseline of 0.8 mg/dL, along with 0.69 g/g proteinuria and an MPO-ANCA titer of 19 units. Her PPI was discontinued and her AKI rapidly improved with hydration to a SCr of 1.5 mg/dL. Three weeks later, and four days after resuming her PPI, her SCr increased to 7.6 mg/dL. Repeat MPO-ANCA titer was 7 units. Renal biopsy showed diffuse interstitial nephritis and glomerular capillary wall thickening (Figure 1A). Immunofluorescence showed capillary wall and mesangial IgG4-dominant depositions which did not colocalize with PLA2R (Figure 1B). Penetrating subepithelial and intramembranous deposits along with thickened membrane were suggesting a late stage MGN (Figure 1C). The patient was diagnosed with ICI-associated interstitial nephritis, likely provoked by PPI. Following a steroid taper, her SCr improved to 1.2 mg/dL.

We reported a late-manifestation of ICI-associated interstitial nephritis (6 months after last exposure) in the setting of PPI use. This case is unique because of its late presentation (>90% of cases present within 3 months from the last dose), and findings of MPO-ANCA antibodies and MGN. Given her mild proteinuria and downtrending ANCA titer, we hypothesized that these were not the cause of AKI, but both were likely ICI-associated nonetheless. Nephrologists should be aware of these rare ICI-associated autoimmune conditions. 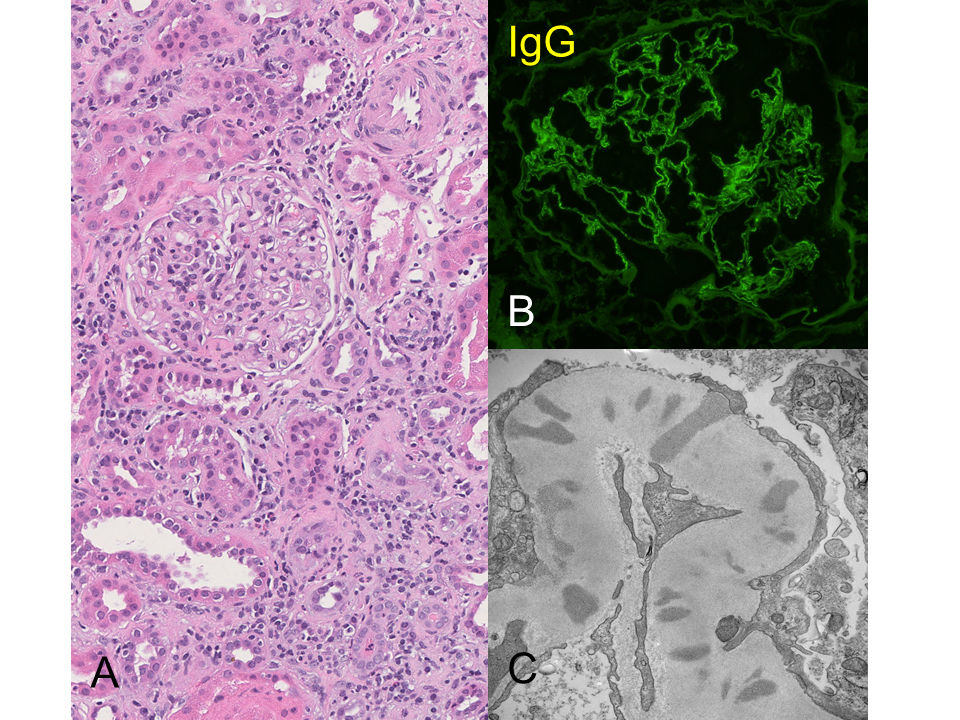