Reduction in the Rate of eGFR Decline with Semaglutide vs. Placebo: A Post Hoc Pooled Analysis of SUSTAIN 6 and PIONEER 6

Reduction in the Rate of eGFR Decline with Semaglutide vs. Placebo: A Post Hoc Pooled Analysis of SUSTAIN 6 and PIONEER 6 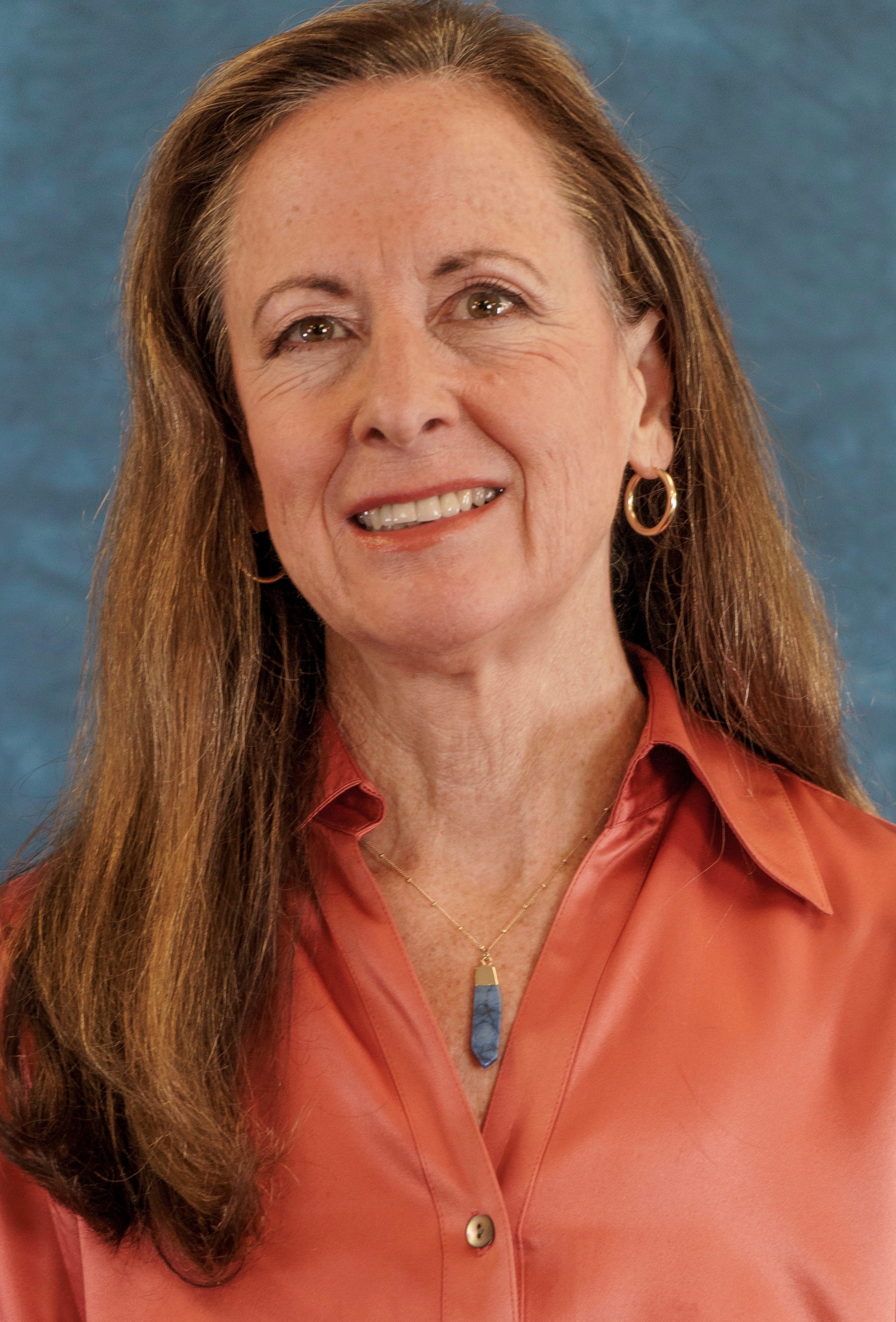 Katherine R. Tuttle, MD, FASN, FACP, FNKF, is Executive Director for Research at Providence Health Care, Co-Principal Investigator of the Institute of Translational Health Sciences and Professor of Medicine at the University of Washington. Dr. Tuttle earned her medical degree and completed her residency in Internal Medicine at Northwestern University School of Medicine in Chicago, Illinois. She was a fellow in Metabolism and Endocrinology at Washington University in St. Louis, Missouri. Her Nephrology fellowship training was performed at University of Texas Health Science Center in San Antonio, Texas. Dr. Tuttle’s major research interests are in clinical and translational science for diabetes and chronic kidney disease. She has published over 200 original research contributions and served two terms as Associate Editor for the Clinical Journal of the American Society of Nephrology and the American Journal of Kidney Disease. Dr. Tuttle has received many honors and awards including the Medal of Excellence from the American Association of Kidney Patients, Garbed Eknoyan Award from the National Kidney Foundation, the YWCA Woman of Achievement Award in Science, and two Outstanding Clinical Faculty Awards at the University of Washington. Dr. Tuttle served on the Board of Directors for the Kidney Health Initiative and has chaired numerous kidney and diabetes related working groups and committees for organizations including the NIDDK/NIH, the National Kidney Foundation, the American Society of Nephrology, the International Society of Nephrology, and the American Diabetes Association.

The SUSTAIN 6 cardiovascular outcomes trial (CVOT) indicated that once-weekly (OW) subcutaneous (s.c.) semaglutide may have beneficial effects on kidney function in subjects with type 2 diabetes (T2D) at high CV risk. SUSTAIN 6 and the PIONEER 6 CVOT (once-daily [OD] oral semaglutide) had similar designs and populations, and both evaluated the effects of semaglutide vs placebo (PBO) on macro- and microvascular outcomes. This post hoc analysis of pooled data from the two trials evaluated the effects of semaglutide vs PBO on kidney function decline.

Data for 6,480 subjects with T2D from SUSTAIN 6 (OW s.c. semaglutide 0.5 and 1.0 mg or PBO, N=3,297; median follow-up 2.1 years) and PIONEER 6 (OD oral semaglutide 14 mg or PBO, N=3,183; median follow-up 1.3 years) were pooled into two groups: semaglutide and PBO. Annual change in estimated glomerular filtration rate (eGFR) was compared (semaglutide vs PBO) in the overall population and subgroups by baseline (BL) eGFR (≥30–<60 or ≥60 mL/min/1.73 m2). Changes in eGFR from BL during trial were analyzed using a linear random regression model with individual intercept and time slope. The estimated treatment difference (ETD) at 1 year between annual rates of eGFR slope from BL was calculated; an interaction p-value <0.05 indicated difference between subgroups.

Semaglutide was associated with a significantly smaller decline in kidney function than PBO in subjects with T2D at high CV risk across tested BL eGFR categories; the data suggest the main benefit might be observed in those with kidney disease. 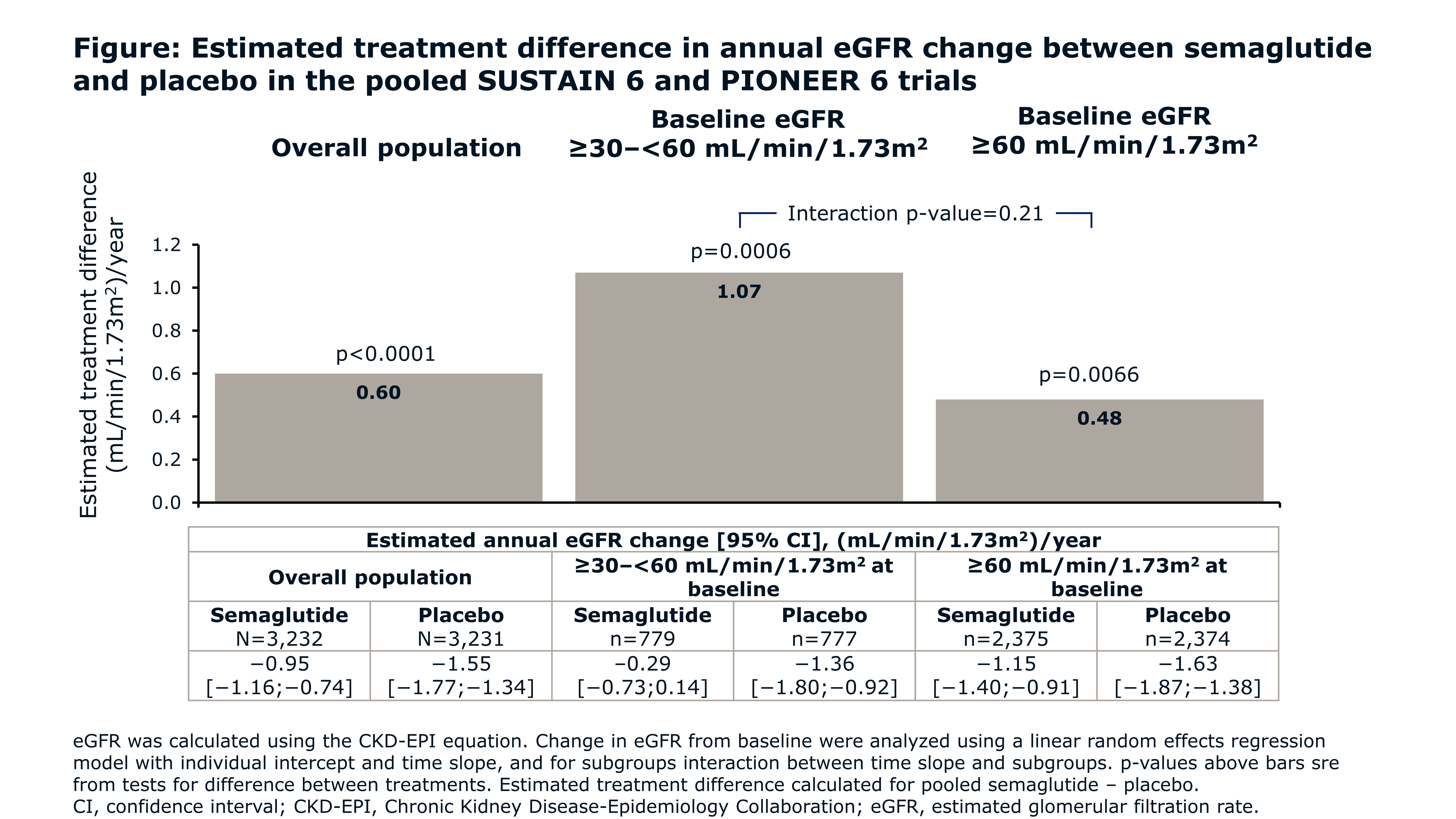