Donor-derived cell-free DNA (dd-cfDNA) has generated interest as a potential biomarker for kidney transplant (KT) rejection. It is possible that the KT biopsy procedure itself can cause the release of dd-cfDNA in the blood stream, therefore affecting the reliability of this assay in the post biopsy period. In this study we evaluated the effect of KT biopsy on the level dd-cfDNA and assessed the magnitude and duration of this effect.

We conducted a single arm prospective study. Samples were collected from 16 adult KT recipients undergoing renal allograft biopsy. All participants had samples drawn within eight hours prior to the biopsy (pre-biopsy), within 20 minutes (hour 0), 2 hours after (hour 2), and 24-48 hours (hours 24-48) after the biopsy.

Mean age at the time of biopsy was 50.6 ± 7.02 years. Most participants were men and Caucasian. Mean serum creatinine at the time of biopsy was 2.24 +/- 0.42 mg/dL. The most common reason for obtaining biopsy was rise in serum creatinine, while 4 patients had the biopsy due to elevation in dd-cfDNA. The pre-biopsy time point was compared against all remaining time points. At hour 0 and hour 2, there was a significantly larger log dd-cfDNA mean scores compared to pre-biopsy time point (0.37 vs -0.44, p=0.006), (0.35 vs -0.44, p=0.03) respectively. By 24-28 hours post biopsy there was no significant difference in log dd-cfDNA mean score compared to the pre-biopsy score.

KT biopsy leads to an increase in dd-cfDNA percentage after the procedure, however, this rise is transient and resolves by 24-48 hour after the biopsy. Providers can obtain dd-cfDNA level as soon as 48 hours post biopsy with high confidence that the levels have not been affected by the biopsy. 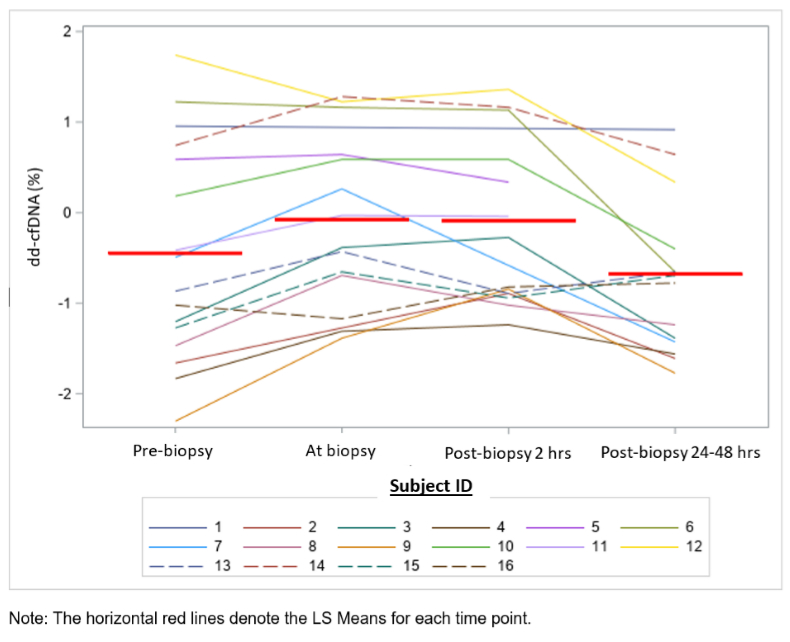