We included first-time kTX recipients under 5 years of age in the USA, Australia, New Zealand, UK and France between 2005 and 2018. A multivariate Cox regression was used to develop a predictive model of graft loss or death on the US cohort. Model discrimination (C-statistics) and calibration were assessed internally and externally on the non-US cohort.

2543 kTx in children <5 years old were included. 10-year overall graft survival rate was 80.0% [95% CI = 77.7% – 82.2%]. Given the interaction between some predictors and recipient’s age, we developed two models stratified on recipient age (cut-off: 36 months) including donor/recipient body surface area ratio, ischemia time, donor weight and immunological matching. Immunological matching was a stronger predictor among older recipients, while morphological variables were stronger predictors in younger recipients. C-statistics on the training cohort were 0.63 (95% CI = 0.57 –0.68) and 0.65 (95% CI = 0.59 – 0.71) and the models were well calibrated. Figure 1 presents the discrimination of the models at different time horizons and the calibration at 10 years on the validation cohort.

We confirm the overall good renal allograft survival in children transplanted under the age of 5. We developed and validated predictive models of graft loss or death based on pre-transplant factors in this population that may be used to inform donor selection. 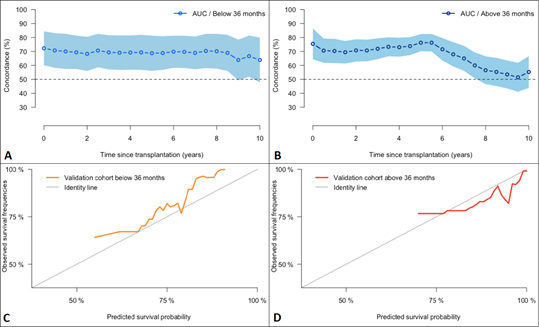