Lymphomatous Infiltration of the Kidney: A Sonographic Diagnosis

Lymphomatous Infiltration of the Kidney: A Sonographic Diagnosis

The purpose of this case study is to illustrate the sonographic findings seen in kidney infiltration by lymphoma.

A 56-year-old man with a history of hypertension, diabetes mellitus type 2 and follicular lymphoma with transformation to diffuse large B-cell lymphoma presented with worsening fatigue, headache and diplopia. MRI of the brain demonstrated central nervous system involvement by the lymphoma. He was also found to have worsening renal function with a serum creatinine of 4.5 mg/dL (baseline: 1.6-2 mg/dL). A renal sonogram (RUS) was performed, which demonstrated bilateral enlarged kidneys (~14.5 cm each) with irregular outlines and multiple parenchymal hypoechoic to heterogeneous lesions. No internal vascularity was noted on color Doppler. These findings are consistent with lymphomatous infiltration of the kidneys, confirmed later by PET (positron emission tomography) scan [Figure]. The renal function continued to worsen despite supportive care, and he required initiation of hemodialysis. Acute kidney injury was initially attributed to poor oral intake and mild hypercalcemia, but lymphomatous infiltration likely contributed to his renal impairment as well. Renal biopsy was not undertaken due to progression of the lymphoma and limited life expectancy.

Kidney is the most common extra-reticular site of leukemic and lymphomatous infiltration, and tumor-cell infiltrates in the kidney are seen in up to 30% of patients with lymphoma. Rarely, renal involvement may be the first manifestation of lymphoma. The kidneys may appear normal on RUS because of the small size of the nodular infiltrates or with the typical findings described above. Unilateral and perirenal infiltration with lymphoma has also been described. Hydronephrosis may be noted on RUS if there is compression of the renal hilum or ureters by the lymphomatous tissue. Nephrologists performing point of care ultrasonography should be aware of these findings. These patients will require a prompt referral to the Hematology & Oncology team when renal ultrasonography leads to a new diagnosis of lymphoma. 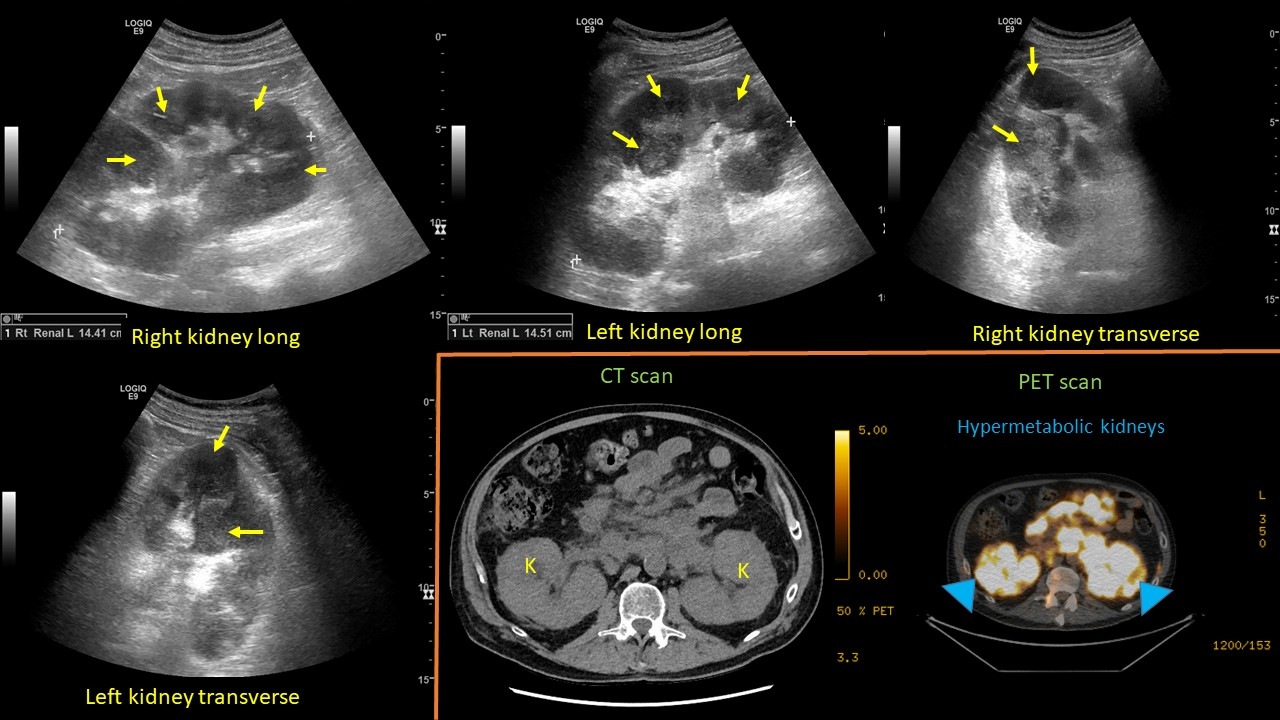