Treating hypertension in breast cancer survivors often hold unique difficulty. These patients may have undergone sentinel lymph node biopsy (SNB) or axillary lymph node dissection (ALND), and are often advised to avoid blood pressure measurement with affected by surgery. Here we present a case of young female after mastectomy, SNB and ALND, who was diagnosed with essential hypertension after mastectomy due to inaccurate measurements from avoiding the use of sphygmomanometer cuffs on her upper extremities.

32-year-old female with past medical history of breast cancer status post bilateral mastectomy and hypertension who presents for hypertension management. Hypertension was diagnosed after her breast cancer diagnosis. After diagnosis, she underwent bilateral mastectomy and sentinel node biopsy and subsequently underwent left axial lymph node dissection. Average clinic blood pressure prior to breast cancer diagnosis was 102/63 including days prior to surgery where BP was 107/72. On post-operative follow ups, the patient’s BP was noted to be elevated (133/75 and then 154/94) and she was started on nebivolol 5 mg daily. Blood pressure continued to be high at clinic and home, nebivolol was changed to amlodipine 5mg daily. After starting amlodipine, patient developed lower extremity edema and headaches. Furosemide 20 mg PO daily was added which resolved the edema but headache persisted. Hydrochlorothiadize was further added when the patient continued to have blood pressures in the 140s/80-90s. On evaluation with nephrology, the was noted that her blood pressures had been measured using her lower extremities since her mastectomy. Blood pressure measured with her right upper extremity was 116/68.

Often patient after mastectomy with SNB or ALND avoids taking blood pressure on affected limb regardless of lymphedema in order to prevent lymphedema. Despite this, the evidence for this is sparse with most recent studies reporteding blood pressure measurement in ipsilateral affected arm as not being risk factor for lymphedema. 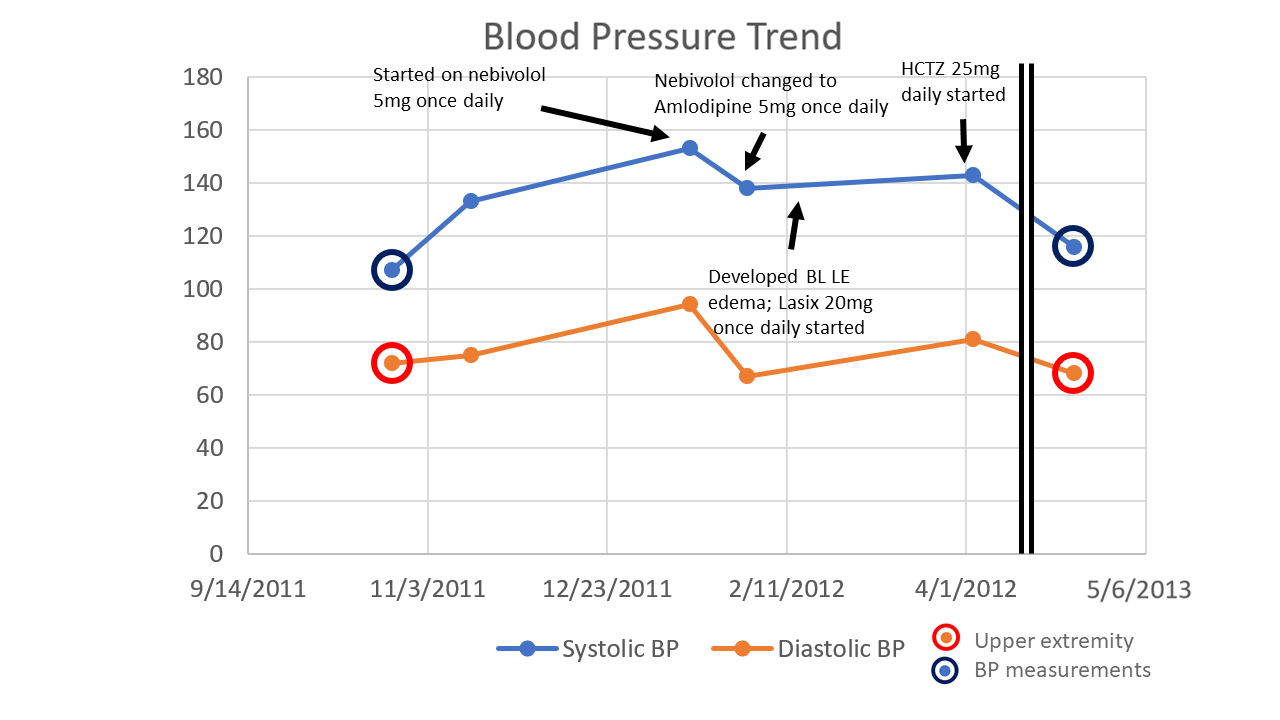