A Unique Case of COL4A3/4 and ACTN4 Mutations Combined

A Unique Case of COL4A3/4 and ACTN4 Mutations Combined

Alport syndrome is due to mutations of the COL4A gene. Males with COL4A5 mutations present with proteinuria and CKD, hearing impairment and anterior lenticonus. Disease in women ranges from mild hematuria and proteinuria to a syndrome similar to that of X-linked males. Patients in families with mutations of the Alpha-actinin-4 gene (ACTN4; autosomal dominant inheritance) present histologically and clinically with focal segmental glomerulosclerosis. We present the first ever-reported case of a patient with both COLA4 and ACTN4 mutations

Family pedigree is shown in the figure. Subject II:1 is a female with Alport’s syndrome diagnosed by kidney biopsy, CKD3 (in her 50's) had genetic testing showing a COL4A3 mutation. Her husband (II:2, in his 50’s), had ESRD presumed to be secondary to diabetes (DKD). Given concerns for possible disease in their 2 sons, genetic testing was performed.. The oldest son (III:1; in his 30’s) showed the same COL4A3 mutation as II:1 but an additional ACTN4 mutation. He has microalbuminuria (90mg/g) and GFR >90 ml/min. The younger son (III:2; in his 20’s) showed the ACTN4 mutation but no COL4A mutation (clinical tests are pending). Given the ACTN4 mutations in the sons, subject II:2 was tested, showing an ACTN4 mutation (suggesting DKD was not the single etiology of his ESRD). Family history showed both paternal grandparents had ESRD, unknown etiology for I:4 (died in her 50’s) and presumed to be due to DKD for I:3 (died in his 80’s)

ACTN4 and COL4A mutations have not been reported in a single patient before. The identification of 2 mutations known to be associated with CKD will allow for early intervention with management of comorbid conditions like hypertension, obesity and diabetes and use of RAAS inhibitors. Distinct disease patterns may emerge associated with specific genetic abnormalties allowing a more personalized treatment. Genetic testing should be considered for all patients presenting with proteinuria as findings may dictate changes in management 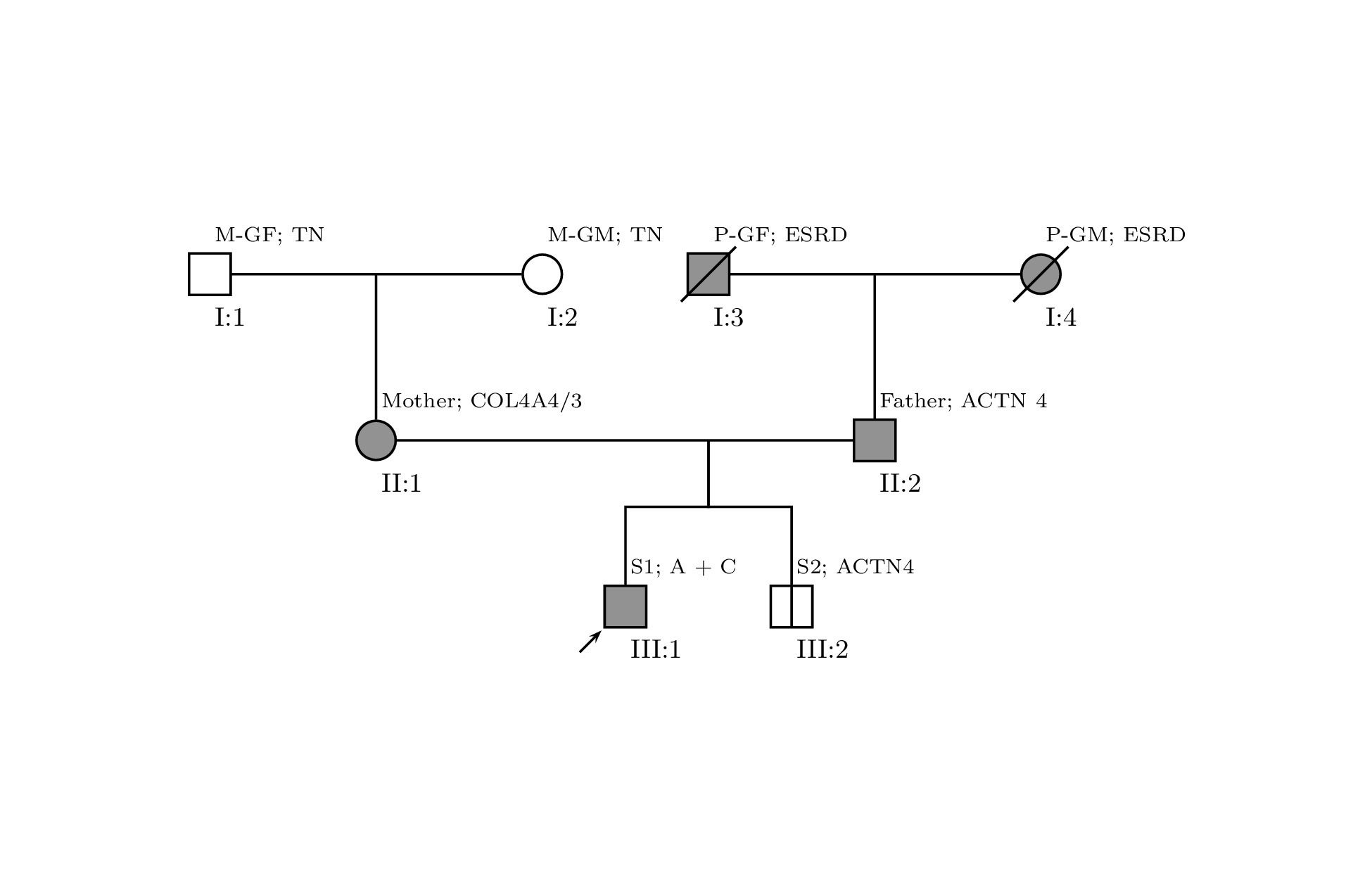