A Case of AKI Secondary to Niraparib, a Poly ADP Ribose Polymerase Inhibitor

A Case of AKI Secondary to Niraparib, a Poly ADP Ribose Polymerase Inhibitor

Niraparib is a poly (ADP-ribose) polymerase (PARP) inhibitor indicated for the maintenance therapy of recurrent ovarian and other gynecological cancers in patients who have complete or partial response to platinum-based chemotherapy. We present a unique case of Niraparib resulting in AKI.

73/F with past H/o HTN, hyperlipidemia, persistent ovarian cancer after Cisplatin treatment, currently on Niraparib therapy was evaluated for worsening creatinine. Her baseline creatinine was 0.9-1.0 mg/dL and eGFR was 54.4 - 61.4 mL/min. She initially developed AKI (creatinine 1.8 mg/dL) with cisplatin which subsequently improved to 1.3 mg/dL with eGFR of 40.2 mL/min, upon completion of cycle. Following the initiation of Niraparib, creatinine gradually trended up to 2.1 mg/dL and calculated eGFR was 23.1 mL/min. No obvious etiology for AKI was identified. Urinalysis revealed muddy brown casts w/ protein of 100 mg/dl without any evidence of UTI. Cystatin C was measured (1.72 mg/L) and Cystatin C based eGFR was 33 mL/min which indicates true AKI as opposed to elevated creatinine without renal injury. Niraparib was suspended following which creatinine started to improve (1.7 mg/dL) along with an improvement in eGFR (29.5 mL/min).

Niraparib is a PARP inhibitor which functions by causing DNA damage resulting in apoptotic cell death. PARP inhibition in animal models has shown to be reno-protective from ischemia and it has been shown to elevate serum creatinine in drug trials without causing AKI. In our case though, patient developed AKI 2/2 ATN from niraparib. Mechanism for this is unclear as this is one of the earliest reported cases. One possible mechanism could be Apoptotic cell death of renal tubular cells. 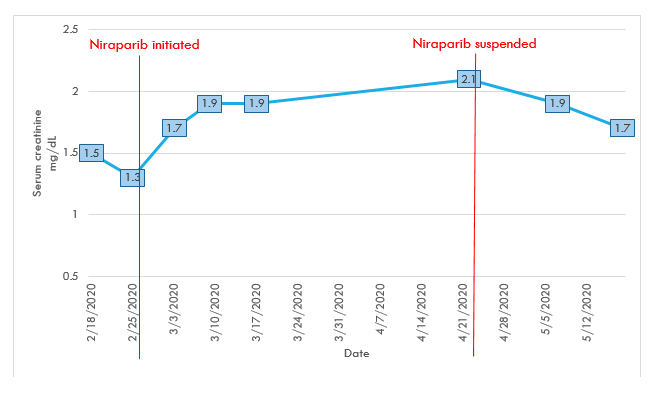 Creatinine trend in our patient