Glomerular endotheliosis is a form of thrombotic microangiopathy (TMA) seen with preeclampsia, anti-vascular endothelial growth factor (VEGF) therapy for cancer, and some forms of Castleman’s disease. We present a case without these usual conditions.

A 31-year-old female with rheumatoid arthritis, ulcerative colitis (UC), and hypothyroidism presented with abdominal pain and emesis. Medications included adalimumab and levothyroxine. Abdominal imaging and upper endoscopy were unremarkable. Serum chemistries were initially normal. Pregnancy testing was negative. Abdominal computed tomography showed mild cecal inflammation. Fecal calprotectin was elevated. Oral budesonide was given for suspected UC flare. Symptoms worsened and she was given intravenous methylprednisolone. She developed proteinuria (up to 3.5 gm/day by 24hr urine) and worsening renal function. Serum complement was only mildy reduced - C3 (72) and C4 (10). C-reactive protein and erythrocyte sedimentation rate were elevated. Autoimmune serologies were unremarkable. Serum creatinine peaked at 5 mg/dl prompting hemodialysis. Kidney biopsy demonstrated severe glomerular endotheliosis but no other features of TMA (Figure). Pulse dose steroids were given and then daily prednisone; she had 2 sessions of plasmapheresis (PLEX). Renal function improved, attributed to steroids, and PLEX was held. At 4 weeks, she had only modest proteinuria (1.4 g/24hr) and improved renal function (serum creatinine (0.9 mg/dl).

Glomerular endotheliosis is thought to occur due to VEGF inhibition in podocytes (by VEGF-inhibitors or by soluble fms-like tyrosine kinase in preeclampsia). Patients with endotheliosis of unknown cause have been reported to respond to immunosuppression (steroids, cyclophosphamide). Endotheliosis occurs in Castleman’s disease and may improve with IL-6 inhibitors. The etiology in our patient remains unknown but she has demonstrated improvement with corticosteroids. 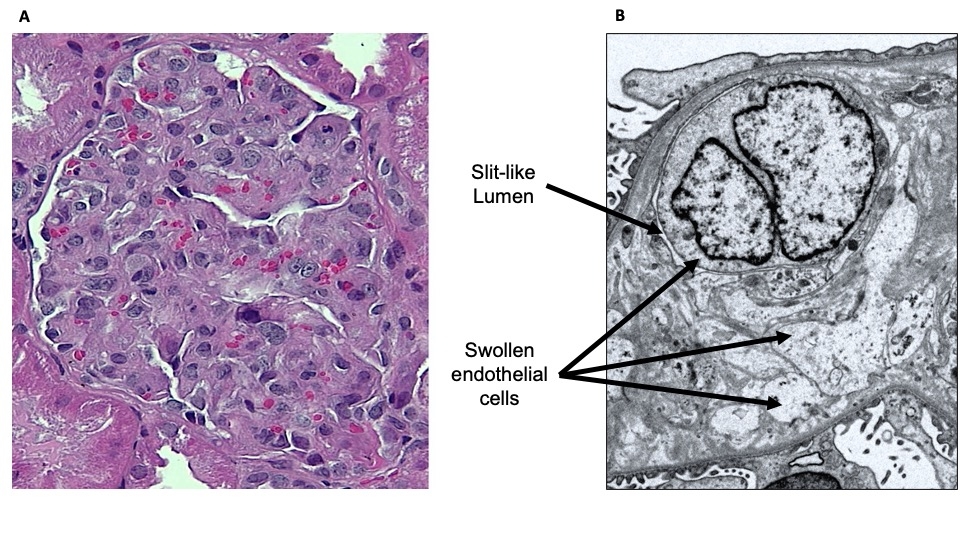 Hematoxylin and eosin (H&E) stain (A) and electron microscopy (B) demonstrating glomerular endothelial cell swelling and loss of capillary lumens.