The mortality rate of patients listed for kidney transplantation (KT) is 5 per 100-patient years. Due to an organ shortage crisis, expansion of KD pool (KDP)is critical (1). Kidney donors (KD) with out-of-hospital cardiac arrest (OHUS-CA) and cardiopulmonary resuscitation (CPR) have low acceptance rate due to presumed delayed graft function (DGF). Donor CA in controlled setting (in ICU) does not impact KF post engraftment (PE) (2) but impact of OHUS-CA is unknown. We propose that terminal serum creatinine (TSC) and Kidney histology (KH) immediatley prior to Kidney transplantation predict KF post KT. We did a nested cohort study to study the impact of OHUS-CA and CPR of KDs on KF and KH.
.

Our transplant program received thirty-five kidney organ donors offers with a procurement biopsy from UNOS during July to December 2019. Retrospectively we reviewed demographics, pre- hospitalization resuscitation information, hemodynamic data and KH. Four patients were excluded; two had missing data; one patient had ischemic infarct and one patient had kidney tumor. The study cohort (N=31) divided into CA-OHUS (N1 =16 and No Cardiac Arrest (No-CA, N2=15) groups. The change (delta) in serum creatinine (DSC) while under donor management (DM) compared in each group. Hypotension during donor management (H-DM) and acute tubular damage score (ATDS) from donor kidney biopsy compared within each group of the cohort.

TSC and ATDS prior to KT were evaluated as surrogates for KF post engraftment and there was no difference between OHUS-CA and No-CA (standard) donors. Effect of ischemic preconditioning was noted in OHUS-CA group (Table). Longer the duration of CPR greater was the residual KF (Fig 1).

KF and KH in KD with OHUS-CA are similar to standard criteria donors hence should not be prejudiced. This will expand the KDP. 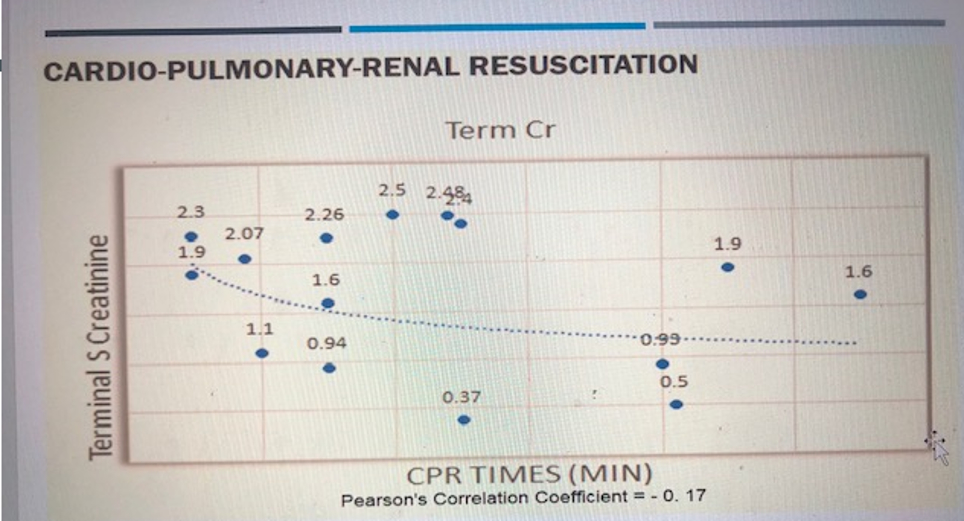