Dialysis disequilibrium syndrome (DDS) is a complication of hemodialysis. Symptoms can include headaches, seizures, and even death.
An extensive literature review yielded thirteen documented reports of patients suffering from cerebral herniation secondary to DDS with poor outcomes.

47-year-old male with hypertension presented to the emergency department (ED) with complaints of abdominal pain. Initial laboratory studies were concerning for thrombocytopenia and acute renal failure. The patient was urgently admitted to the Intensive Care Unit (ICU) and hemodialysis was initiated.
Approximately 20 minutes into the hemodialysis session, the patient became unresponsive. A right eye gaze deviation and right-sided fasciculations of the upper and lower extremities were observed. Hemodialysis was discontinued and a head CT was obtained. Imaging revealed pontine edema with mass effect and cerebellar tonsillar herniation (Figure 1).
Intravenous mannitol was initiated. Within 30 minutes of initiation of the mannitol infusion, the patient regained consciousness. Follow-up neurological exam showed resolution of the right-sided fasciculations and gaze palsy. The follow-up head magnetic resonance imaging (MRI) showed resolution of the midline shift and tonsillar herniation.

Historically, even with swift intervention, cerebral herniation due to DDS carries a grim prognosis. Current guidelines stress the importance of preventative measures and the use of IV mannitol if cerebral herniation is suspected. The case reported herein is the first documented account of reversal of the clinical and imaging findings of tonsillar herniation secondary to DDS using intravenous mannitol. 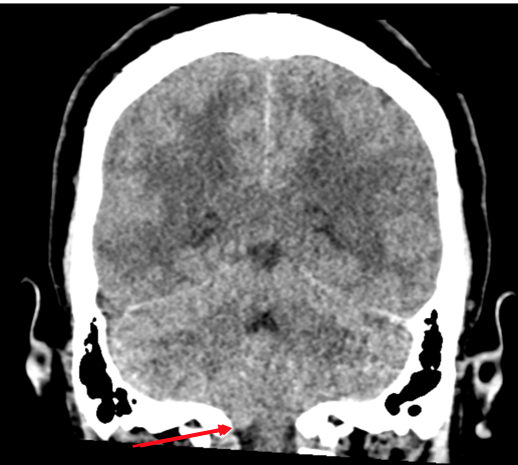