Sodium-glucose cotransporter 2 inhibitors (SGLT2i) were reported to increase hemoglobin levels in short-term clinical trials. Whether it is also true in real clinical practice is unknown.

This is a retrospective cohort study. Inclusion criterion was diabetics who visited our outpatient clinic from January 2019 to August 2020. Exposure of interest was the use of SGLT2i. Outcomes were hemoglobin levels. For the cross-sectional analyses, non-linear regression models were fitted with restricted cubic splines to investigate the association between hemoglobin levels and estimated glomerular filtration rate (eGFR) for users and non-users of SGLT2i. For the case-control study, cases (anemia defined as hemoglobin <12 g/dL for men, <11g/dL for women or the use of erythropoiesis stimulating agents) and controls were matched by age, sex, and eGFR.

Among 2063 diabetics, 723 were on SGLT2i. In the cross-sectional analyses, hemoglobin levels were higher among SGLT2i users compared with non-users at eGFR >15 mL/min/1.73m2. For the case-control study, 197 cases and controls were matched. Conditional logistic regression showed that the use of SGLT2i was associated with significantly lower prevalence of anemia (OR: 0.35 [0.21-0.58]). Adjusted mean differences (95% CIs) in hemoglobin levels between users and propensity score-matched non-users of SGLT2i were 0.7 (0.3-1.0) g/dL at 6 months. Among SGLT2i users, odds of increase in 6-month hemoglobin were similar across eGFR categories except for eGFR <15 mL/min/1.73m2.

The use of SGLT2i was associated with higher hemoglobin levels and lower prevalence of anemia in real clinical practice. 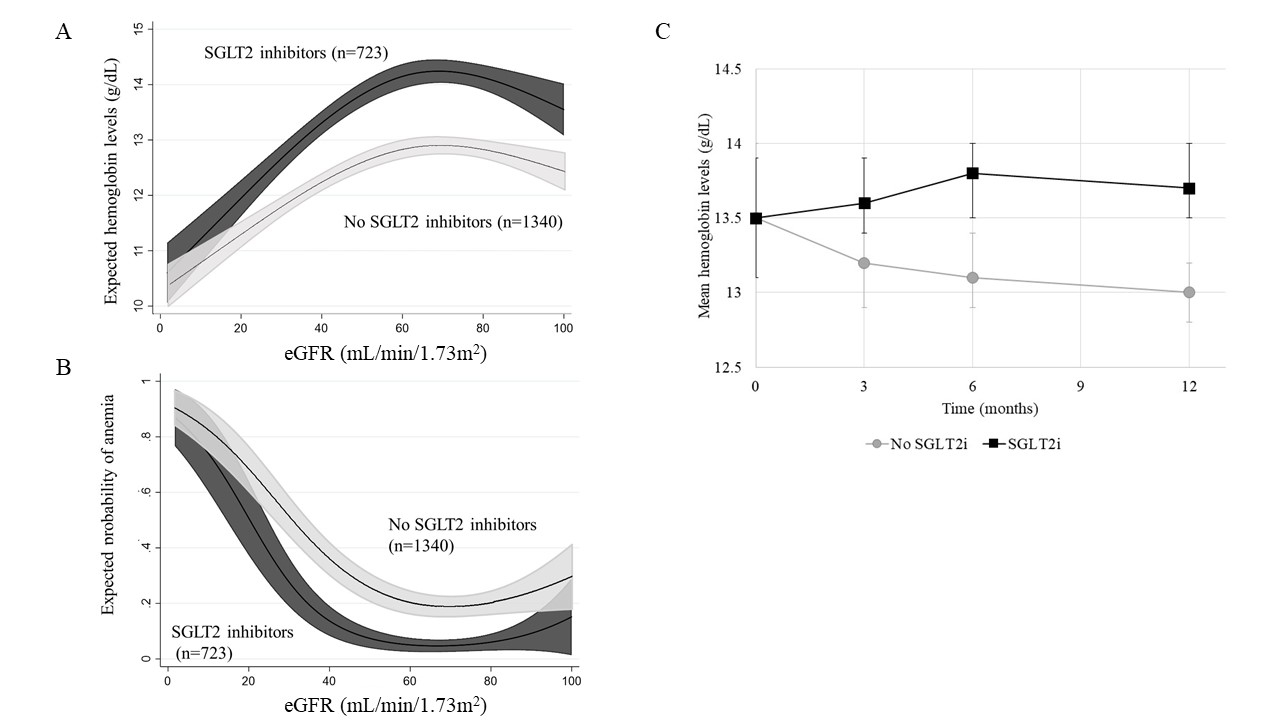