Collapsing FSGS is a histologic renal lesion, most often seen in patients with HIV infection. We report a rare case of collapsing FSGS in a patient with HLH due to T-cell lymphoma

A 50 years old lady with a PMH of SLE who was admitted to the hospital with fatigue. She was diagnosed with hepatosplenic T-cell lymphoma and HLH. She received multiple coures of chemotherapy with a good response.
During the course of hospitalization, she developed oliguric AKI with rising serum creatinine to 2 mg/dl from baseline 0.8 mg/dl with nephrotic range proteinuria of 9g/24hrs. Immunological workup was significant for high ANA titer 1:1280 but with normal complements C3 and C4, and negative anti-double strand DNA, anti-smith, anticardiolipin IgG, anti-GBM, and ANCA antibodies. Infectious workup was negative for HIV, syphilis, and hepatitis B and C. Kidney ultrasound showed normal-sized kidneys without hydronephrosis. She then underwent a renal biopsy, which revealed the collapsing variant of FSGS, characterized by glomerular collapse with overlying podocyte hypertrophy. The biopsy additionally showed the absence of tubuloreticular inclusions or electron dense deposits by electron microscopy. Immunofluorescence showed largely negative/baseline staining. Her renal function was improved by the time of discharge with serum Cr 0.9 mg/dl and improving in proteinuria.

Collapsing FSGS can be associated with a variety of causes. It was seen frequently in patients with HIV infection. Other etiologies include non-HIV infections (e.g., CMV, parvovirus B19), drugs (e.g., pamidronate, interferon), lupus nephritis, diabetes mellitus, and genetic factors.
Collapsing FSGS has been described with HLH in a few reported cases, which are mostly related to lymphoma. The renal involvement is believed to be caused by T cell activation and cytokine storm resulting in podocyte injury. 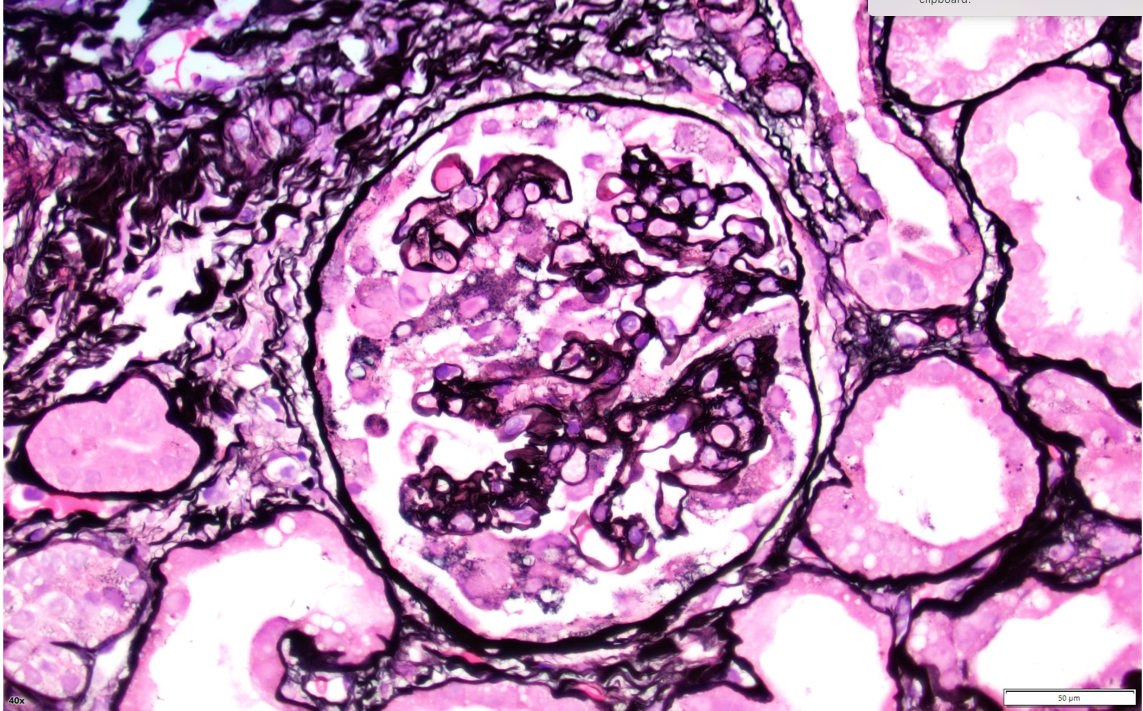 Jones Silver Stain at 40 x magnification: A glomerulus shows collapse of the glomerular tuft with overlying podocyte hypertrophy and hyperplasia.