The kidneys rely on an abundant number of mitochondria to produce energy to drive key functions, such as fluid/electrolyte balance. Mitochondrial dysfunction has been linked to the progression of renal diseases including acute kidney injury and diabetic nephropathy. Thus, the mitochondria are a key target for therapeutic development. Kidney-on-chip platforms provide a dynamic in vivo-like tissue culture environment to investigate renal pathophysiology. Yet, it is difficult or impossible to investigate mitochondrial dynamics due to lack of real-time measurements. Here, we present a sensor integrated kidney-on-chip platform with real-time cell oxygen consumption rate (OCR) readouts for monitoring the dynamics of mitochondrial function.

Human primary renal proximal tubule epithelial cells (hRPTEC) were cultured in PREDICT96 (P96), a high-throughput organ-on-chip platform. Integrated optical- based oxygen sensors enabled measurement of dissolved oxygen. Flow was turned off to measure decreases in oxygen and compute OCR. hRPTEC were treated with mitochondrial inhibitors Oligomycin and Antimycin A and un-coupler FCCP. OCR was measured prior to and following the drug treatments.

We demonstrated real-time and label-free monitoring of drug-induced shifts in mitochondrial respiration within a high-throughput kidney-on-chip platform. Our work enables new investigations into mitochondrial dynamics in response to nephrotoxic agents or disease progression, as well as potential therapeutics that target the mitochondria. 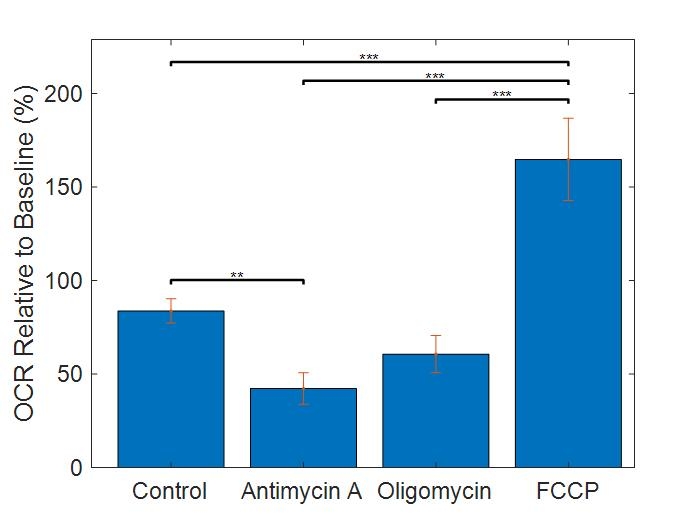