LCAT deficiency is a rare autosomal recessive disorder due to mutations in the LCAT gene presenting with corneal opacities, anemia, proteinuria, reduced HDL and CKD with progression to ESKD by the 4th- 5th decade. Electron microscopy (EM) is characteristic for abundant partially electron-dense and lucent deposits in the mesangium and basement membrane. Late diagnosis is not uncommon due to its rarity and nonspecific presentations in the early stages. Here we report a case of therapy resistant FSGS later uncovered as LACT deficiency confirmed by gene tests.

A 49-year-old male presented to genetic nephrology clinic in 2020 with a clinical diagnosis of LCAT deficiency. In 2007, he had presented with hematuria, proteinuria with a serum creatinine of 2.4mg/dl, Hb 11 g/dL, albumin 2.4g/dL, total cholesterol 416mg/dL, HDL 14mg/dL and urine protein of 8.9g/d. Urine microscopy showed fine granular casts and dysmorphic RBCs. Kidney biopsy revealed FSGS with moderate tubulointerstitial fibrosis. EM showed some unexplainable intramembranous and subendothelial lucencies, which were thought to be sequela of prior immune mediated membranous glomerulonephritis. Patient failed treatment with months of steroids, oral cyclophosphamide and mycophenolate. Repeat biopsy in 2010 showed worsening of the prior findings. In 2011, corneal deposits led to a suspicion of LCAT deficiency. He progressed to ESKD in 2011 and kidney transplant in 2020. Genetic testing disclosed a homozygous nonsense variant c.321C>A (p.Tyr107*) in LCAT gene. A thorough genetic counseling included risk for his siblings and graft recurrence. 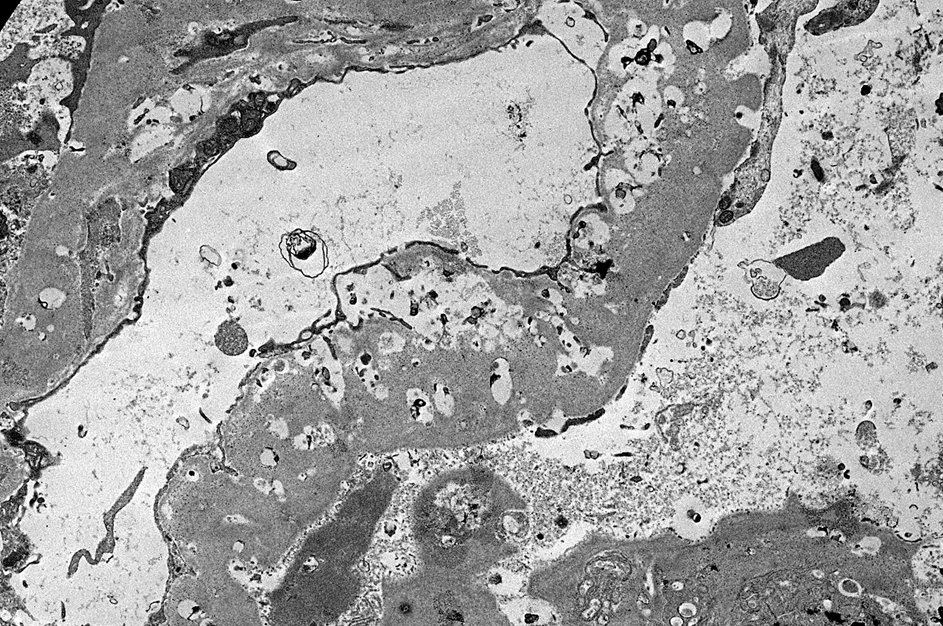