Pediatric patients who received a kidney-only transplant from 2010-2018 at a single center were considered for inclusion. Patients with follow-up time of at least 1 year were included. Tacrolimus IPV was determined using the mean coefficient of variation over the immediate 6-month time period prior to each tacrolimus level at each year post-transplant. All available tacrolimus levels were included in the analysis. Patients were stratified by age at time of transplantation (ages 1-6, 7-12, 13-18 years). A paired t test was performed to evaluate the IPV change with increasing time post-transplant, with a specific post-transplant year tested against the prior year for each age group.

220 pediatric kidney transplant patients met inclusion criteria. Median age was 12.8 years. 117 patients (53.2%) were male, and 54 (24.5%) underwent living donor kidney transplant. IPV trends varied by age group, but IPV was high for all groups during the first year. After the first year, IPV decreased over time for patients in the 1-6 years group while it increased for those in the 7-12 and 13-18 years groups (Figure 1).

Tacrolimus IPV patterns differ in pediatric kidney transplant patients based on age at time of transplantation. It is likely that in the youngest group of patients, factors other than nonadherence explain their initial prolonged high IPV. More research is needed to quantitate and better understand the factors influencing variability in children given the association between IPV and adverse graft outcomes. 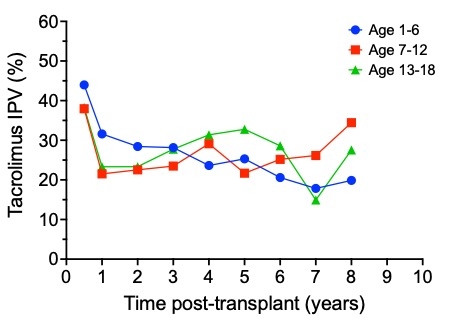