Superoxide dismutase-2 (SOD2) is an enzyme with antioxidant action. Anti-SOD2 antibodies (anti-SOD2 IgG2) were recently described in the serum of subjects with Membranous Nephropathy, as antigens of a possible second wave injury. The presence of anti-SOD2 IgG2 correlated with worse outcomes in terms of response to treatment [1]. The presence and role of anti-SOD2 IgG2 in Systemic Lupus Erythematosus (SLE) and Lupus Nephritis (LN), a secondary autoimmune glomerulonephritides, are to be clarified.

As main characteristics, we report median age of 40 (IQR 28-54) years, the predominance of females (88%), disease activity (SLEDAI) of 4 (IQR 2-8).
At the cross-sectional analysis, serum levels of anti-SOD2 IgG2 at T0 are significantly higher in LN than in SLE (Fig 1a). Considering LN, the serum levels of anti-SOD2 IgG2 at T0 were significantly higher than the other time points (Fig 1a). No correlation with the histological class of LN is reported. In LN, the reduction of anti-SOD2 IgG2 was in accordance with proteinuria. Anti-dsDNAs did not result as a valuable marker of disease activity (Fig 1b).

Circulating anti-SOD2 IgG2 are elevated in active LN.
Serum levels of Anti-SOD2 IgG2, also considering the concomitant negative serum levels of anti-dsDNAs in all phases of LN, support the hypothesis of direct involvement of anti-SOD2 antibodies in LN as second wave antibodies that actively contribute to the manifestations of autoimmune glomerulonephritides. 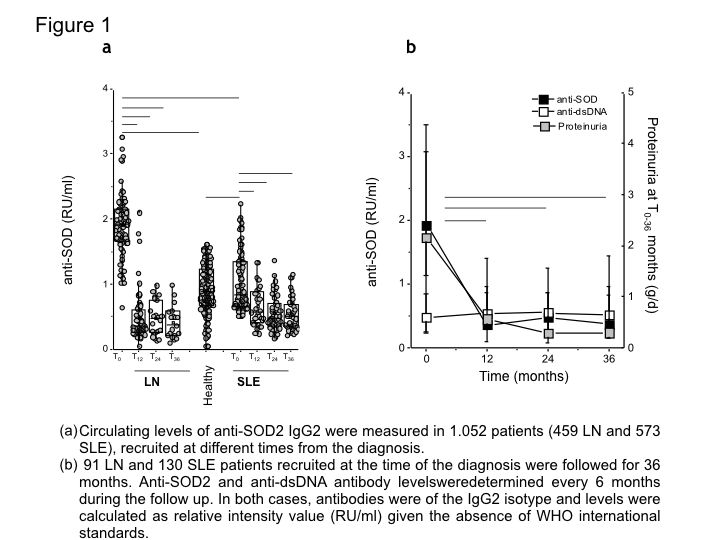