Developing effective screening tool for Chronic kidney disease (CKD) helps in reducing morbidity, mortality as well as cost and burden to the health system. Here we present preliminary result on feasibility and performance of employing Convolutional Neural Network (CNN) prediction model in detecting patients who are at-risk of CKD based on longitudinal data from Electronic Health Records (EHR).

A synthetic dataset containing a total of 100,000 synthetic patient records, derived from cross-sectional cohort of Veteran from the general population, was used to train and validate the prediction model. The dataset was generated by using Synthea™, a patient generator tool, and contains standard data elements that are commonly used in major Electronic Health Record systems. A total of 12,503 patients with CKD and 48,212 patients without CKD matched by propensity score along with 290 other features including anthropometrics, medication, comorbidities, and laboratory data were used to train and validate the prediction model.

The CNN algorithm has been designed, implemented and tested using the synthetic dataset, achieving precision of 0.918, recall of 0.739, specificity of 0.983, accuracy of 0.932, and AUROC of 0.937 as depicted in Figure 1. Additionally, based on the dataset, age, diabetes, elevated BMI and medication taken, specifically 24 HR Metformin Hydrochloride, represent the topmost important features to predict the onset of CKD.

Using CNN and synthetic veteran patient dataset, we have demonstrated a viable prediction model for CKD detection in healthy patients at-risk of CKD using longitudinal data from EHR system. The prediction model can be easily deployed in a CKD screening program in healthcare institutions with existing EHR systems. 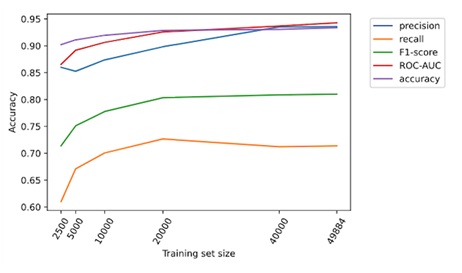