Gd-IgA1 plays a central role in IgAN pathogenesis. Higher Gd-IgA1levels are independently associated with a greater risk of renal function deterioration that differ per Gd-IgA1 quartile. The Ph2a JANUS trial was the first to show substantial Gd-IgA1 reduction with atacicept in IgAN patients (pts). This analysis investigated whether atacicept could reduce Gd-IgA1 level by quartile and therefore potentially mitigate the poor prognosis of IgAN based on Gd-IgA1.

The JANUS study enrolled 16 IgAN pts with persistent proteinuria. Pts were randomized to atacicept 25mg, 75mg, or placebo (PBO). Gd-IgA1 was assessed at baseline (BL), wks 4, 12, 24, 48, and 72. At BL, pts were divided into 4 equal groups according to the quartiles of Gd-IgA1 distribution and assessed at each timepoint. A separate cohort of ~150 IgAN pts from the Univ of Leicester was used as a reference population for quartile determination.

In IgAN pts, dose-dependent reductions in Gd-IgA1 were observed for up to 72 wks with atacicept (Fig 1). For pts in the highest quartile all 3 of 3 in the PBO group had no significant change over 48-72 wks, while all 4 of 4 in the atacicept highest quartile group had significant reductions. PBO pts transiently increased or decreased Gd-IgA1 levels by 1 quartile, atacicept 25 mg stably reduced Gd-IgA1 levels by 1 quartile in 2/6 (33%) pts and atacicept 75 mg stably reduced Gd-IgA1 levels by at least 1 quartile in 4/5 (80%) pts and by 2 quartiles in 3/5 (60%) pts. These results were generally consistent when using quartiles determined by the larger reference Univ of Leicester population.

In IgAN pts atacicept demonstrated a durable and substantial reduction in Gd-IgA1 in a dose dependent manner up to 72 wks. A stable 2 quartile decrease in Gd-IgA1 levels was observed in the atacicept 75 mg arm. The ongoing Ph2b ORIGIN trial evaluating up to atacicept 150 mg in IgAN pts will help determine how reduction of Gd-IgA1 translate to renal function. 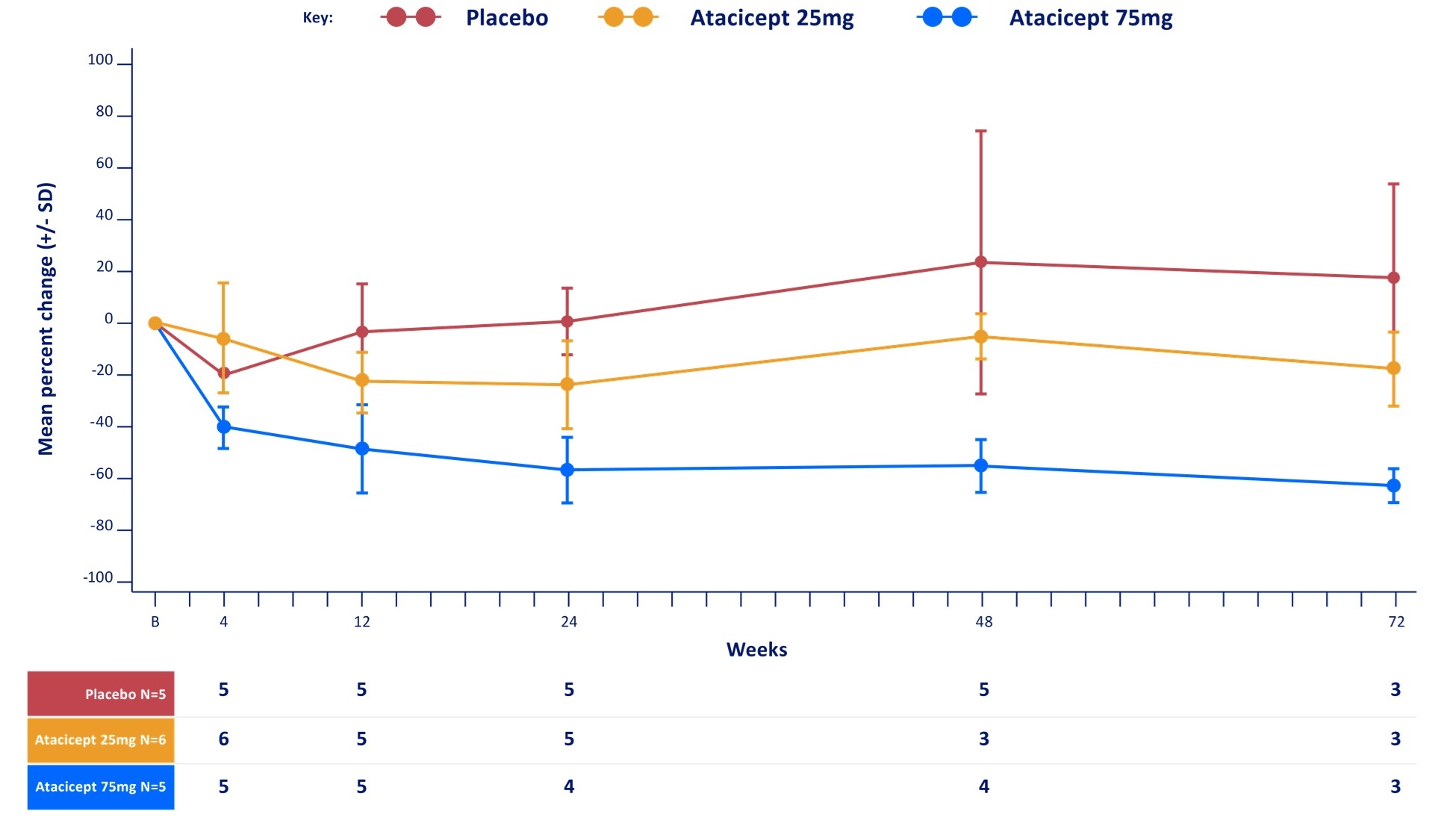