Adult patients with HF on maintenance dialysis between January 2011 and December 31, 2016 were identified using the United States Renal Data System. There were 6306 patients with at least one prescription for H-ISDN and 75,851 non-users. The primary outcome was death from any cause. Secondary outcomes included cardiovascular death and sudden death. Treatment effects were estimated using stabilized inverse probability weights in Cox proportional hazards regression. Because H-ISDN has been shown to improve outcomes in Black HF patients, we investigated effect modification by race

Age was similar in H-ISDN users (66 ± 13 years) and non-users (69 ± 13 years) with 50% and 51% men, respectively. H-ISDN (51%) users were more likely to be of Black race than non-users (27%). Dialysis vintage was longer in H-ISDN (25 months) users compared with non-users (15 months). All characteristics were well balanced in weighted models. Risks of all-cause mortality, cardiovascular death, and sudden death were significantly reduced in H-ISDN users compared to non-users (Table). We did not identify significant effect modification by race (Figure)

To our knowledge, this is the first analysis of the impact of H-ISDN on mortality in ESKD. Our results suggest that combination H-ISDN improves survival in dialysis patients with HF 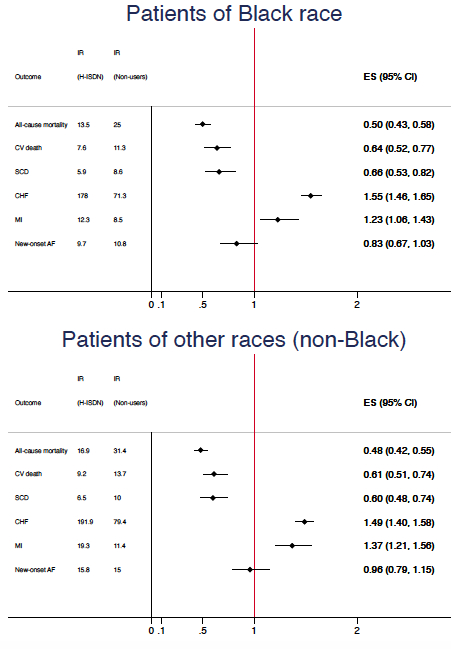