Association of Urinary Potassium Excretion with Progression of CKD

Association of Urinary Potassium Excretion with Progression of CKD

Out of range serum potassium levels are associated with worsening renal function and increased occurrence of cardiovascular disease (CVD) events in chronic kidney disease (CKD). However, conflicting results have been reported regarding the predictive value for adverse health outcomes of urinary potassium excretion. Therefore, we conducted a cohort study to determine whether urinary potassium excretion is an independent risk factor for renal function deterioration or increased CVD events.

During follow-up (median 35 months), 509 CKD progression and 129 CVD events were identified. Further, 62 patients died during follow-up. Multivariate Cox models showed that an increased risk of CKD progression was observed in patients with low UK/Cr compared to those with high UK/Cr, after adjustment for demographic factors and laboratory data. In a fully adjusted model, adjusted hazard ratios (HRs) with the fourth (highest) quartile as reference category were 2.02 (95% CI, 1.50–2.71), 1.34 (95% CI, 1.02–1.77), and 1.14 (95% CI, 0.87–1.50), for Q1–3 respectively (trend: P < 0.001). Similarly, an inverse probability weighting analysis showed an increased risk of CKD progression in Q1 and Q2 comparing with Q4. We did not observe any significant modification in subgroup analyses. Furthermore, consistent association was confirmed between low fractional excretion of potassium and worsening renal function. However, UK/Cr had no association with the incidence of CVD events.

A low UK/Cr is independently associated with worsening renal function but not with an increased risk of a CVD event in patients with pre-dialysis CKD. 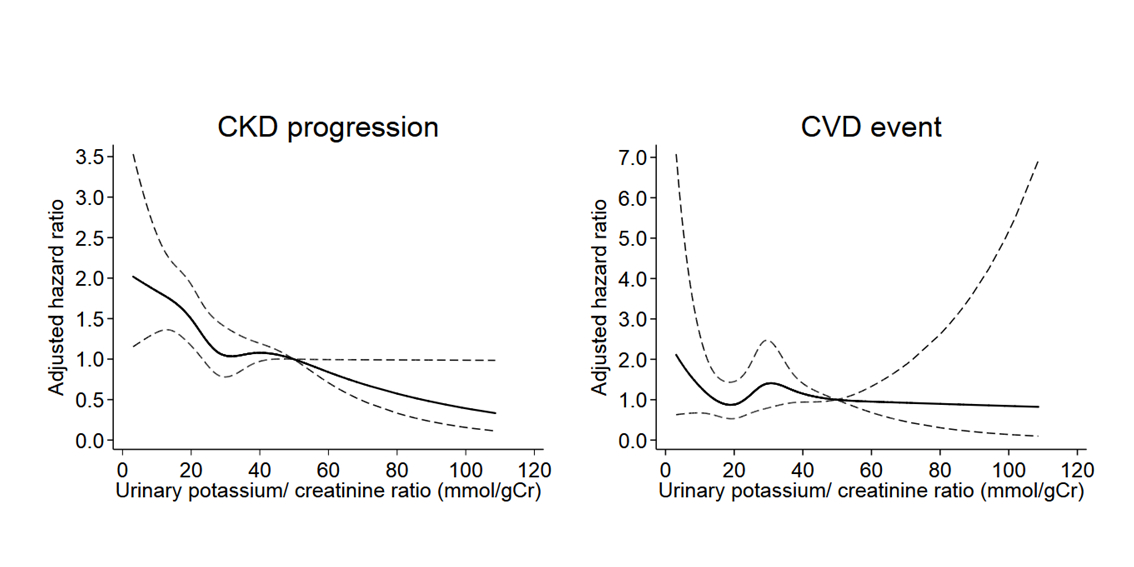