Air pollution is a major contributor to cardiovascular and kidney complications. The mechanisms linking air pollution with cardiorenal events are not well understood. We sought to assess whether Galectin 3 level, a marker of myocardial fibrosis and remodeling is associated with air pollution exposure in hypertensive patients with and without chronic kidney disease.

Air pollution may be associated with worsening myocardial fibrosis as evidenced by increasing levels of Galectin 3 in individuals with preexisting CKD. Further studies are needed to corroborate these findings with rigorous cardiac imaging studies. 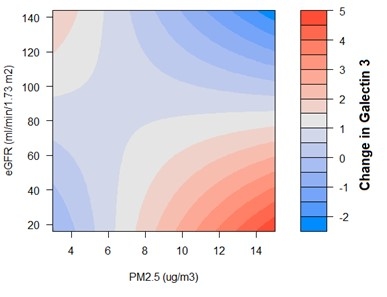 Change in Galectin 3 and PM2.5 exposure by eGFR