The NKF-ASN Task Force recommends that kidney function be estimated by an approach that is accurate introducing bias through racial adjustments. Use of multiple biomarkers may offer such an approach which we explored in a prospective community cohort of HA and AI in rural New Mexico.

Ethnicity, inflammation and diabetes increase discordance among kidney biomarkers. B2M was affected the least and should be strongly considered as a measure fulfilling the criteria for the NKF-ASN because its eGFR equation does not need adjustment for race or sex(PMID: 26362696)

p-values (ANOVA) from null-space kernel regression. DBP & hs-CRP were not predictive of any biomarker 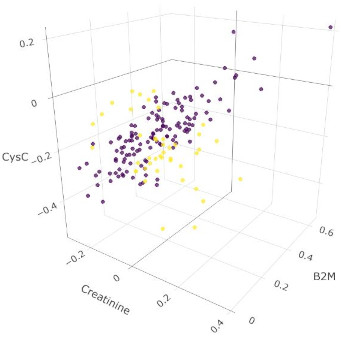