Prevalence and Progression of Pediatric CKD in a Large National Cohort

Prevalence and Progression of Pediatric CKD in a Large National Cohort

Data for children <19 years of age were extracted from the IBM MarketScan commercial and Medicaid databases for the years 2009-2018. pCKD prevalence estimates were calculated using stage-specific ICD-CM diagnosis codes (585 and N18) and additional established qualifying pCKD codes. Survival curves were created to estimate the probability of reaching ESKD, stratified by type of CKD code utilized (stage-specific vs other codes).

In a large national cohort, 298,679 children with pCKD were identified over 10 years, with higher period prevalence in Medicaid-insured children. Stage-specific information was available for a small proportion of children, but when present was associated with a higher probability of reaching ESKD. This data suggests that children with conventional, staged CKD codes are more likely to have rapid progression while other codes that qualify for pCKD may capture children with kidney disease that are slower to progress. 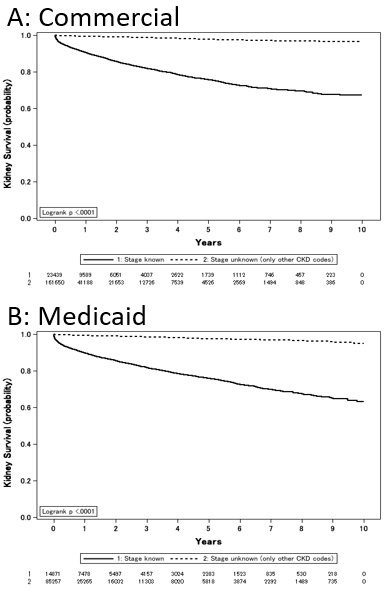 Probability of Kidney Survival Stratified by Type of Diagnostic Code