Arteriovenous fistula (AVF) maturation failure is an unmet clinical need. Aberrant blood flow is thought to impair AVF remodeling, but previous literature has largely focused on hemodynamics averaged over the entire AVF. We hypothesize that hemodynamics is not uniform and thus any treatment’s effect size is not uniform in AVF. We used the PDE5A inhibitor sildenafil and performed MRI-based computational fluid dynamics (CFD) to test our hypotheses.

Femoral AVFs were created in young male Sprague-Dawley rats. Sildenafil was given daily starting at 14 days before AVF creation and continuing for 21 days, at which time rats underwent MRI. MRI scans were used for measuring cross-sectional lumen area (CSA), and for CFD to derived flow rate, wall shear stress (WSS), oscillatory shear index (OSI), and vorticity. Results were split into 4 zones: 0-5, 5-10, 10-15, and 15-20mm away from the anastomosis.

Sildenafil treated rats had significantly larger CSA, flow rate, WSS, OSI and vorticity than control rats in all zones (p<0.05)(Fig. 1). In both groups: (1) While flow rate remains constant in all zones, CSA increased from 0-5 to 15-20 zone. (2) Velocity, WSS and vorticity were the highest in the 0-5 zone, and each parameter drops significantly thereafter. (3) OSI increases at the 5-10 zone and then decreases gradually. 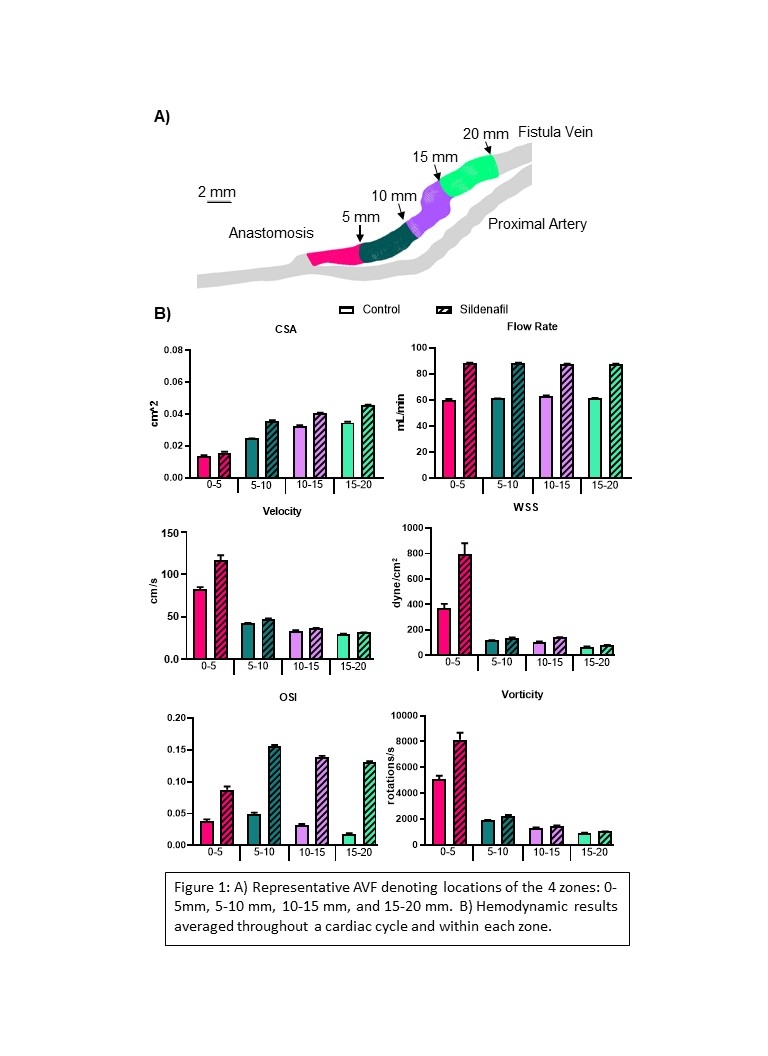