Novel Use of Daratumumab for Post-Hematopoietic Cell Transplant Membranous Nephropathy

Novel Use of Daratumumab for Post-Hematopoietic Cell Transplant Membranous Nephropathy

Membranous nephropathy (MN) is the most common cause of glomerulopathy after hematopoietic cell transplantation (HCT), usually seen with graft versus host disease (GVHD). Although remission frequently occurs upon immunosuppression, 20% of patients fail to respond and may progress to end stage renal disease. Here we report the rapid remission of a treatment resistant patient with daratumumab (Dmab).

A 16 year old female 1 year post-HCT for beta thalassemia major was started on ruxolitinib for oral GVHD. Three months later, she developed nephrotic syndrome. Renal biopsy showed MN. Serum and renal tissue were negative for PLA2R antibody. Ruxolitinib was changed to ibrutinib in case MN was medication induced. She was treated with tacrolimus (trough 3 – 8 ng/mL), prednisone, losartan, atorvastatin, and 4 weekly rituximab infusions. Eight months into therapy, she failed to meet criteria for even partial remission. The toxicity of additional steroids and/or cyclophosphamide was undesirable. With 0% CD19 cells, rituximab was not indicated. Thus, plasma cell depletion with Dmab was trialed.

Dmab was given at weeks 1, 4, and 17. Her nephrotic syndrome resolved and her serum albumin was greater than 3.0 gm/dL by week 10. She weaned off of steroids and tacrolimus by week 16, at which time she had near-complete remission of her renal disease. Trialed off of losartan week 16 – 17, but protein excretion increased, so it was restarted. Time course and biomarkers of MN are in Figure 1.

The mechanism of HCT-associated MN is incompletely understood. Its association with GVHD and often successful treatment with rituximab have implicated direct or indirect humoral activation as potential pathogenic mechanisms. The success of CD38 depletion with Dmab may implicate alloantibody production by resident plasma cells as a driver of refractory disease. Dmab may be a novel therapeutic option for HCT patients who are not responsive to traditional MN therapy. 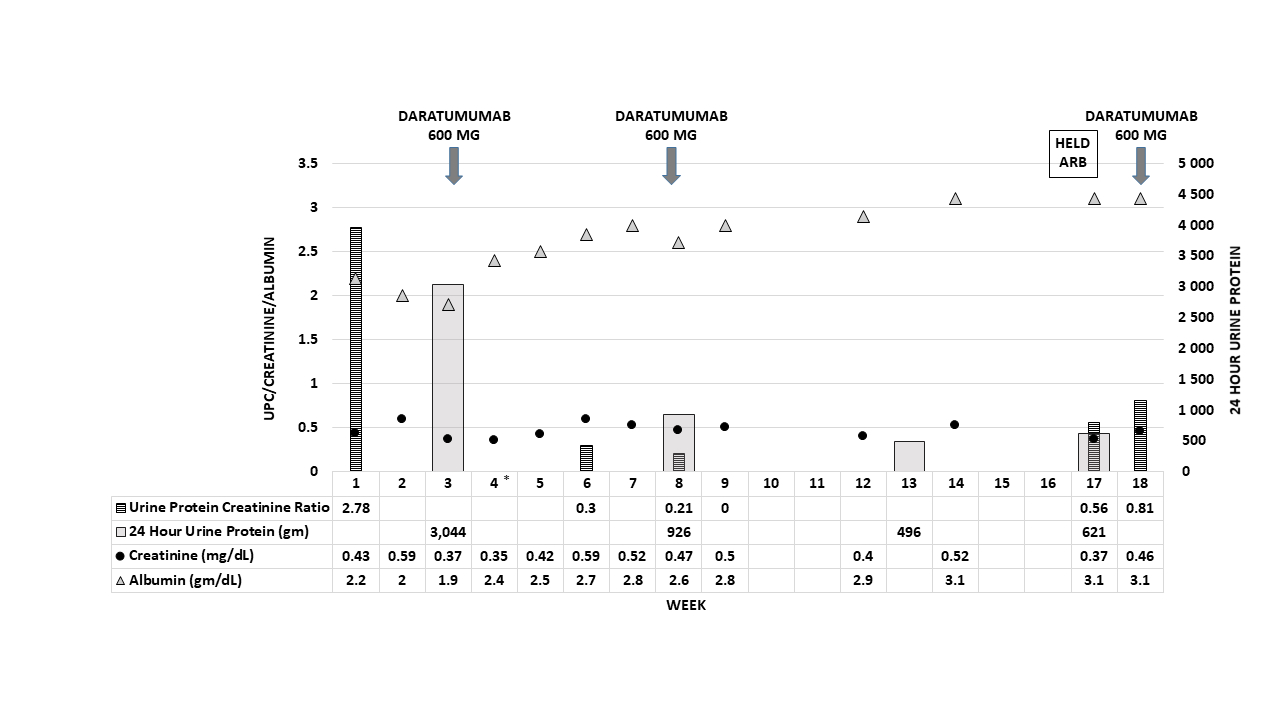