Kidney transplantation is regarded as the best treatment for end-stage kidney disease, with survival benefits also in elderly patients. However, little is known regarding (determinants of) health-related quality of life (HRQoL), and changes in HRQoL in elderly kidney transplant recipients (KTR).

We used data from KTR ≥65 years old at the time of kidney transplantation, enrolled in the ongoing prospective TransplantLines Biobank and Cohort Study. Data on HRQoL were assessed using SF-36 mental and physical component scores (MCS and PCS). Side effects of immunosuppressive drugs were assessed using MTSOSD-59R questionnaires. In a subgroup with available data on HRQoL before transplantation, we investigated HRQoL trajectories.

We included 111 KTR (age 70±4 years, 39% pre-emptive and 45% living procedures). At one year after transplantation, eGFR was 48±16 ml/min/1.73m, MCS was 51±8, and PCS was 52±7. MCS was lower in females (Pt-test=0.018), and in KTR that suffered from rejection in the first year (Pt-test=0.005). PCS was higher in KTR that were pre-emptively transplanted (Pt-test=0.010) and lower in those with post-transplantation diabetes mellitus (PTDM, Pt-test=0.008). Number of side-effects of immunosuppressive drugs was strongly associated with both MCS and PCS (both Plinear regression<0.001). Age, eGFR, hemoglobin, pre-transplant comorbidities, hospitalizations and infections in the first year were not associated with HRQoL. In 43 KTR with available data both before and after transplantation, PCS increased significantly after transplantation (48 to 52; Ppaired t-test= 0.001, Figure 1), while MCS did not significantly improve (49 to 51; Ppaired t-test = 0.095).

Medication-related side-effects, transplant rejection, transplantation after start of dialysis and PTDM were associated with worse HRQoL among elderly KTR, whereas eGFR and age were not. Moreover, HRQoL improves after kidney transplantation in KTR ≥65 years old. 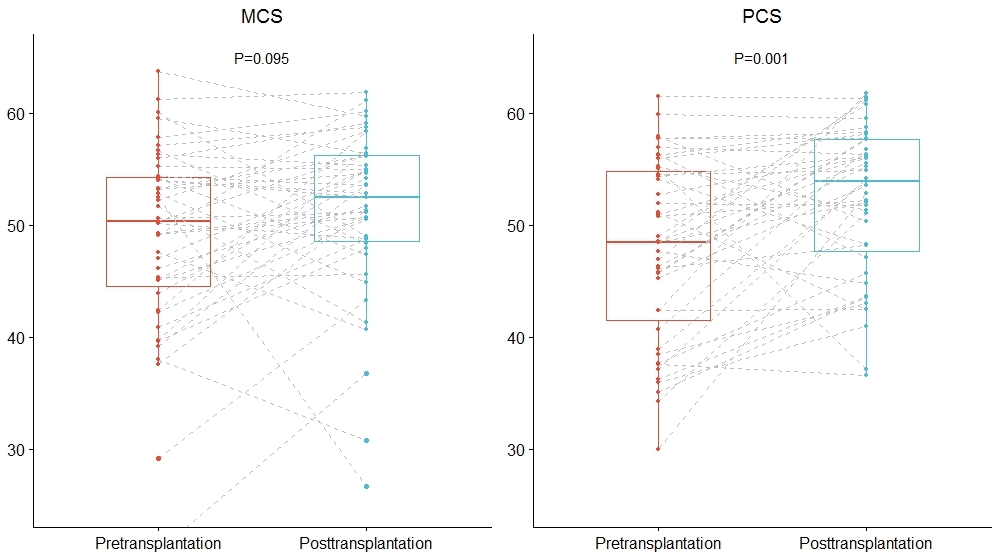