Renal Outcome and Infectious Complications Associated with Induction Regimens for Kidney Transplantation Among Children: A NAPRTCS and PHIS Collaborative Study

Renal Outcome and Infectious Complications Associated with Induction Regimens for Kidney Transplantation Among Children: A NAPRTCS and PHIS Collaborative Study

2410 KTx recipients with data in both datasets were identified. 340 subjects (14.1%) received no induction, 960 (39.8%) IL2 RB only, 934 (39.1%) ATG/ALG, and 176 (7.3%) alemtuzumab. Table 1highlights eGFR decline, using ratios obtained by dividing any year’s eGFR by the preceding year. Annual decline in eGFR was slower in the ATG/ALG group vs IL2RB or alemtuzumab and higher among children transplanted between ages 0-4 years. Table 2 summarizes rejection and infectious frequencies. Alemtuzumab had lower rates of rejection and BK viremia compared to IL2RB and ATG/ALG.

Longitudinal decline in eGFR was similar across all induction agents, though decline with ATG/ALG was lowest. Although rejection and BK viremia was lowest with alemtuzumab, there was no difference with EBV or CMV infection or post-KTx malignancy. 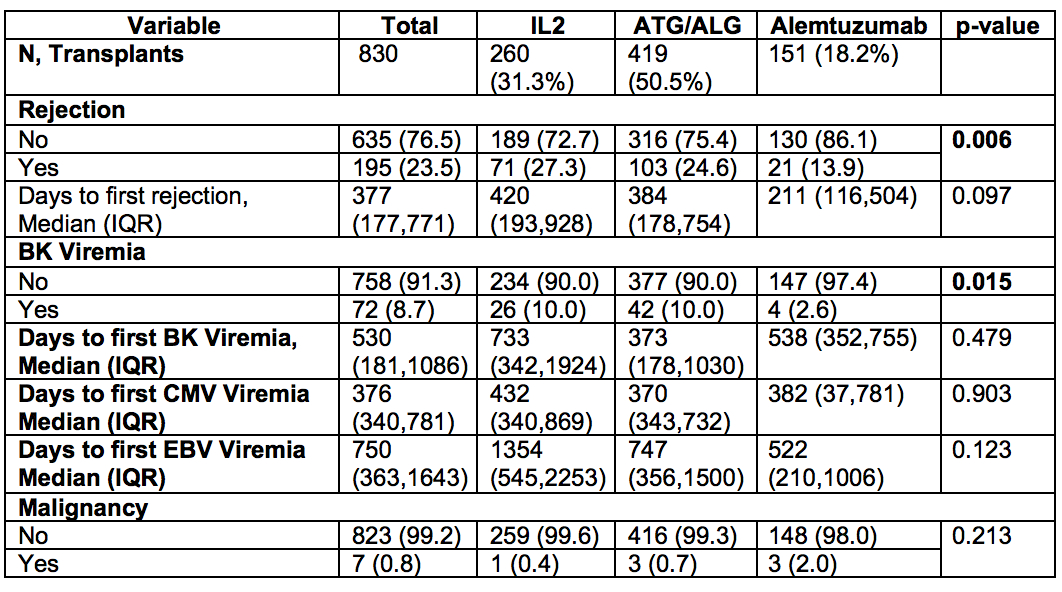